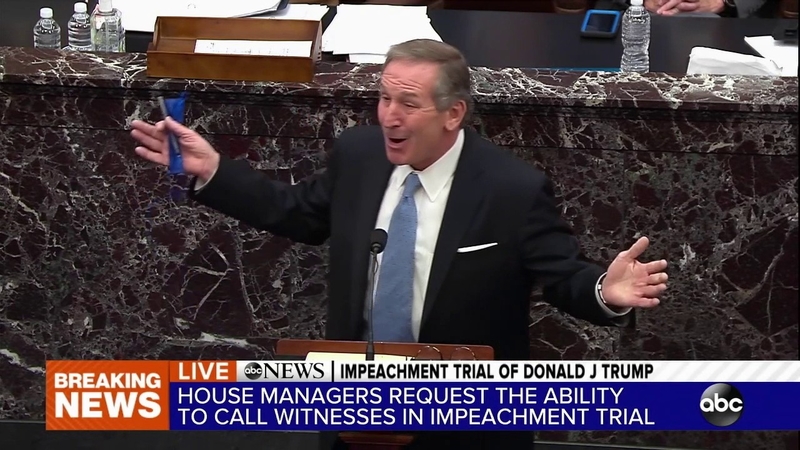 PHILADELPHIA (WPVI) -- Trump impeachment lawyer Michael van der Veen told senators Saturday that if Democrats wished to call a witness, he would ask for at least 100 witnesses and would insist they give depositions in person in his office in Philadelphia.

He said many depositions need to be taken including House Speaker Nancy Pelosi and Vice President Kamala Harris.

"If they want to have witnesses, I'm going to need at least over 100 depositions. Not just one," van der Veen said.

Van der Veen said the depositions should not be done over Zoom, the online video chat service that has grown in popularity during the COVID-19 pandemic.

"We did not do this hearing by Zoom," van der Veen said as he tapped his podium with each word.

"These depositions should be done in person in my office in Philadelphia," van der Veen said. "That's where they should be done."

His animated statement was met with laughter from the chamber, which visibly angered van der Veen.

He continued, "I don't know how many civil lawyers are here, but that's the way it works, folks. When you want somebody's deposition, you send a notice of deposition and they appear at the place where the notice says. That's civil process."
SEE ALSO: Fight over witnesses could delay trial conclusion

He then responded to the laughter in the room.

"I don't know why you're laughing," van der Veen said.

"I would remind everybody we would have order in the chamber during these proceedings," Leahy said.

Van der Veen who stepped away while Leahy was speaking returned to the podium.

"I haven't laughed at any of you and there's nothing laughable here," van der Veen said.

The trial is being held in person, but lawmakers are wearing masks and the coronavirus pandemic has halted most normal activity, including close contact in offices for depositions. In many civil and criminal cases, such work is handled via conference call.

"If they want to have witnesses, I'm going to need at least over 100 depositions. Not just one," Trump's defense attorney Michael van der Veen says at #impeachmenttrial. https://t.co/BY7pGN4vv8 pic.twitter.com/Kql85RJc1J

The Chester County, Pennsylvania resident earned his first law degree, a J.D. from Quinnipiac School of Law, in 1988. He received a Masters of Laws (LLM) from Temple University School of Law in 1995.

She has widely shared a conversation she had with House Republican leader Kevin McCarthy over Trump's actions on Jan. 6 as the mob was rioting over the presidential election results.
SEE ALSO: GOP congresswoman says Trump-McCarthy phone call during Capitol riot shows Trump sided with mob
EMBED More News Videos

In an expletive-laced phone call with House Republican leader Kevin McCarthy while the Capitol was under attack, then-President Donald Trump said the rioters cared more about the election results than McCarthy did.

Five Republican senators joined all Democrats in voting 55-45 on a motion to consider witnesses and testimony.

Van der Veen blasted the late action, saying it's time to "close this case out."

However, no witnesses will be called to the trial.

Written testimony of Rep. Herrera Beutler was admitted into evidence, and neither the Trump legal team nor the House Managers made any further motions for witnesses.