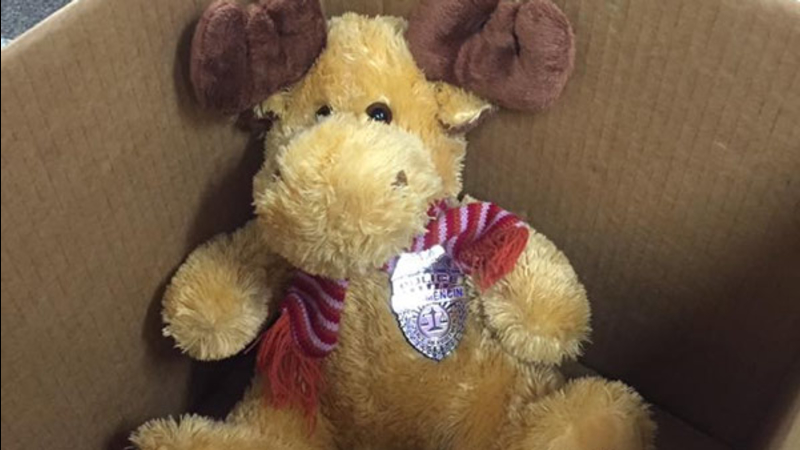 The many adventures of Montco girl's Mr. Moosey

TOWAMENCIN TWP., Pa. (WPVI) -- A Montgomery County toy is about to set out on a great adventure across the globe.

The stuffed animal has been the beloved companion of a local 5-year-old girl. But after a chance encounter with a police officer that moose is about to take on a mission.

The budding friendship between the child and officer started with, of all things, a routine traffic stop.

A couple of weeks ago, Towamencin Police Officer James Gibbas pulled over Megan Brown, a mother of four, for an expired tag.

"I got stopped. He was so nice, didn't give me a ticket," Brown said.

"The back window of the van rolled down and this adorable little girl in the back was holding a stuffed moose out the window trying to give it to me," Gibbas said.

How could he not accept it? Especially given the touching reason behind the gesture.

That moose now has a name and growing popularity on Facebook.

Officer Gibbas called the stuffed animal Mr. Moosey and gave him quite a purpose.

"Instead of keeping him in my car for my safety, I would see about sending him around to other police officers to keep them safe," Gibbas said.

So far Mr. Moosey has visited the Abington Police Department, the Second Alarmers in Willow Grove, Hazelton, and Hershey, but next he's going international.

Yes, even if it comes in the form of a small moose.

"I was just amazed. This is a little kid that at such a young age can have such an understanding of what a small gesture like that could mean to anybody," Gibbas said.

Mr. Moosey still has quite a lot of traveling to do.