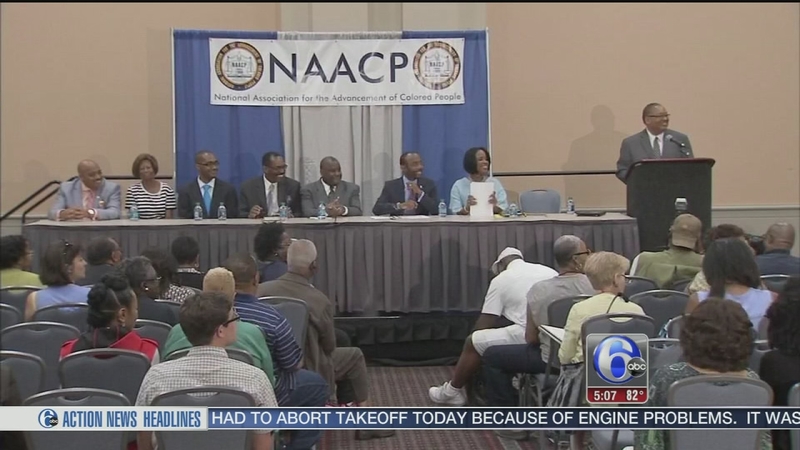 CENTER CITY (WPVI) -- The lowering of the Confederate flag was the topic of conversation Friday as the NAACP's 106th annual National Convention kicked off in Philadelphia.

Teens from across the nation came, competing as part of the NAACP's Youth Achievement Program.

Among them were students from South Carolina, who watched as the Confederate battle flag was lowered from the State House in Columbia.

"It symbolizes that the world is taking a different turn and that it's not all about hating one another but how we can come together as a community," said Eric Favor of Marion, South Carolina.

"It feels like we, as black people, are more united and seeing that if we all stick together, there's going to be a change that's made. We made history and the flag is down," said Jamie Cabbagestalk of Marion, South Carolina.

On June 17, nine black church members were gunned down during Bible study in Charleston, South Carolina.

Photos of Dylann Roof, the man charged with the killings, surfaced in the days after the rampage showing him posing with the Confederate flag.

Public outcry led state leaders to call for the battle flag's removal from the State House.

NAACP leaders say their fight to bring the flag down began with an economic boycott in South Carolina 15 years ago.

"What a proud moment it is, not for the state of South Carolina only, but for this republic - the United States of America - when a symbol of hatred and of division and exclusion was brought down," said Roslyn Brock, NAACP Board of Directors.

Tourism officials say the gathering will bring $10.5 million to the city.

"The NAACP convention is needless to say one of the most prestigious conventions we ever book. I want you to understand that," said Jack Ferguson, Philadelphia Convention and Visitors Bureau.