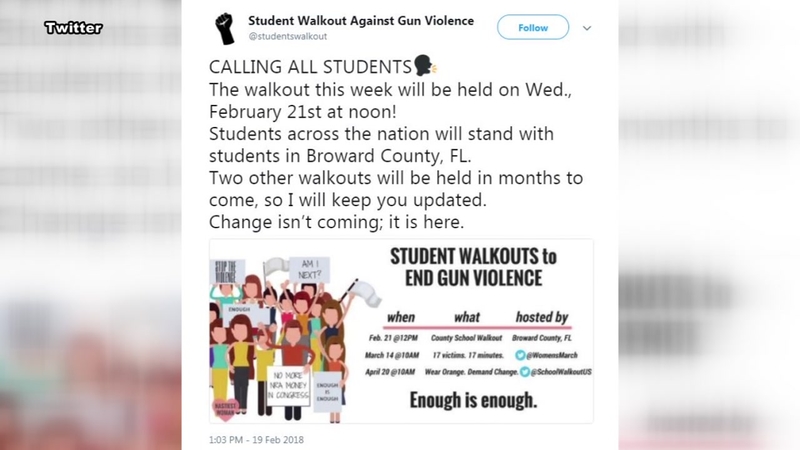 NEEDVILLE, Texas -- With events planned encouraging students, teachers, parents and administrators to walk out in protest of gun violence in schools, one Houston-area school district says students will not be allowed to participate on its campuses.

Needville ISD posted a statement to the Needville High School Facebook page from Superintendent Curtis Rhodes saying that while it is sensitive to the recent incident in Florida, it "will not allow a student demonstration during school hours for any type of protest or awareness!! Should students choose to do so, they will be suspended from school for 3 days and face all the consequences that come along with an out of school suspension."

The post also goes on to say that notes from parents will not stop the discipline.

A group on Twitter named Student Walkout Against Gun Violence said a walk out was planned for Wednesday and called on students to stand in solidarity with those in Florida.

CALLING ALL STUDENTS🗣
The walkout this week will be held on Wed., February 21st at noon!
Students across the nation will stand with students in Broward County, FL.
Two other walkouts will be held in months to come, so I will keep you updated.
Change isn’t coming; it is here. pic.twitter.com/c2zYSyXHJg

Another protest called the National School Walkout is set for March 14 at 10 a.m. in each time zone.

Needville ISD did not reference any specific protests in its post but did mention the movements in general that appear to be growing on social media.