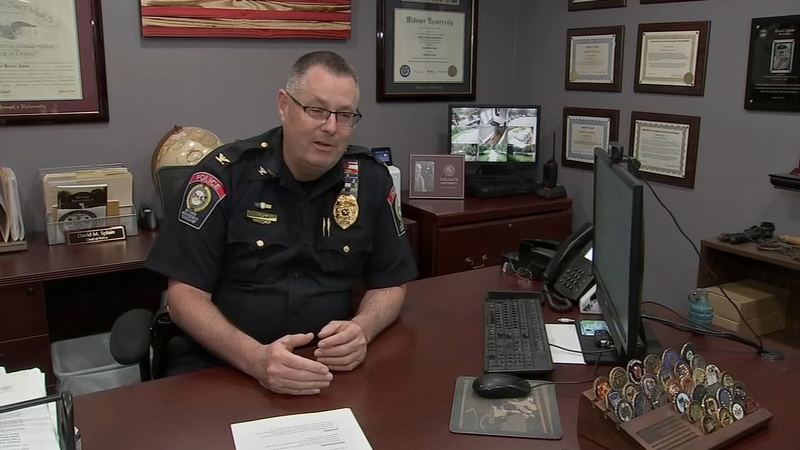 NETHER PROVIDENCE TWP., Pennsylvania (WPVI) -- A Delaware County police chief is aiming high as he strives to improve policing and community relations, not just in his jurisdiction but all across Pennsylvania.

Nether Providence Police Chief David Splain has been in law enforcement for 37 years.

Cuellar had a few years under his belt for Action News and Splain was a rookie cop in Yeadon.

At the time, Yeadon became the first police department in Pennsylvania to install a dashcam in a patrol car.

"It's no longer the police officer gonna have to come in and tell his story and the defendant tells his. The judge and the jury make the decision somewhere in between. The tape doesn't lie," explained Splain back in 1990.

Fast forward to today: Splain is now the chief of police in Nether Providence. He's led the department for the last nine years and is about to be installed as president of the Pennsylvania Chiefs of Police Association.

"In the last two years, law enforcement has really taken a beating," said Splain in dismay.

Fully cognizant that relations between police and some communities are poor, he has an ambitious agenda. Splain wants Pennsylvania's police departments to be held to the highest standards.

"Training and education is another initiative. It's extremely important," said Splain.

He also is pushing for all 1,068 police departments in Pennsylvania to embrace the latest technology.

"Body cameras and dash cameras have been a big initiative since all the civil unrest. The public is craving accountability and transparency," he explains.

Of course, he readily admits that many police departments cannot afford such technology.

"We need to encourage our state and federal legislators to support these projects financially so we don't draw a line between the haves and the have-nots," said Splain.

He says hard work lies ahead, but he believes it will greatly benefit police and the communities they serve.