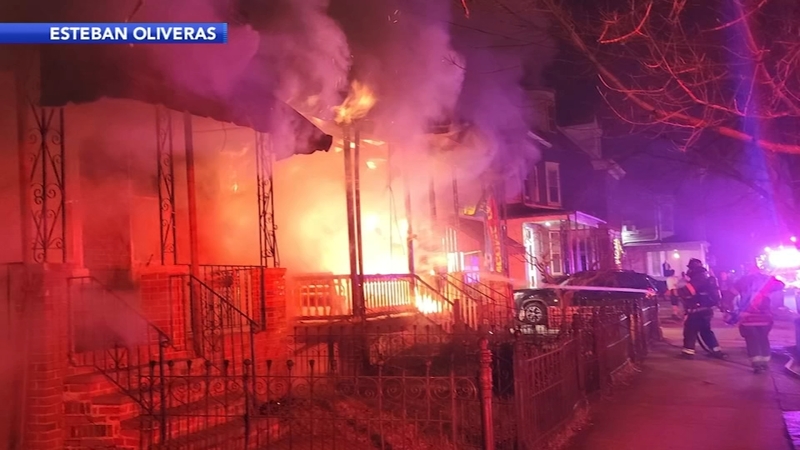 TRENTON, New Jersey (WPVI) -- The cause of a fire that sent a woman and child to the hospital for smoke inhalation in Trenton, New Jersey is under investigation.

Nine people were displaced after three rowhomes were deemed uninhabitable.

Esteban Oliveras returned to his home in the 300 block of Hamilton Avenue Friday afternoon, hours after an explosion-like sound woke his family.

"My wife woke me up to tell me she heard a loud bang and smelled smoke. So I got out of bed and went to investigate, went outside, and there was flames coming from right next door out the window," said Oliveras.

He, his wife and his two-year-old daughter ran out moments later.

A woman and child were taken to an area hospital for smoke inhalation.

A doorbell camera shows smoke billowing from the home as firefighters worked to ventilate the building.

Trenton fire officials say the blaze broke out around 1am Thursday and the fire was under control in about half an hour.

Officials believe the fire started in the middle first-floor unit, which suffered the most damage.

Neighbors say the people in that apartment moved in recently.

"It was just a bomb - an explosion and a fire and you could see it," said Chester Chianese of Trenton.

Oliveras says he's relieved no one was seriously hurt.

"We're just lucky that we're safe, reall, and everything else is kind of secondary at this point," said Oliveras.

If you have any information, contact Trenton fire marshals.