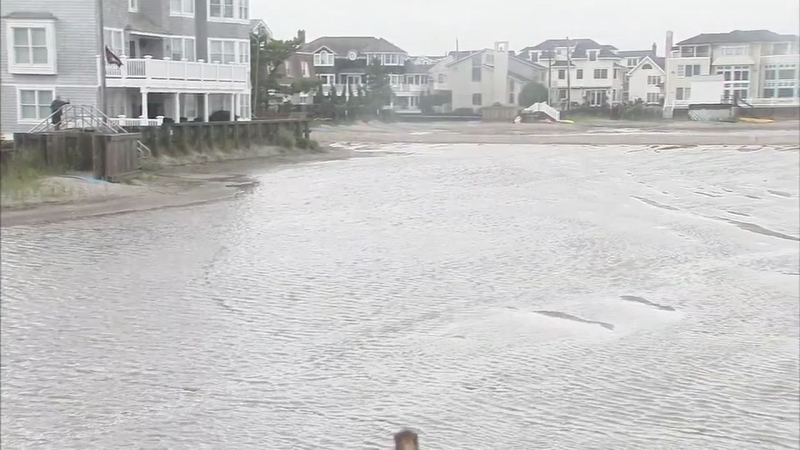 MARGATE, N.J. (WPVI) -- Lakes of Margate. That's how locals are dubbing the ponds that form each time it rains in the Jersey Shore town.

After Monday's rainfall, Margate residents are again flooded with anger.

"Any water that comes in has nowhere to go and that's what's happening," Mayor Mike Becker said.

The ponding, stretching several beaches, has bacteria and is limiting beach access. Officials had to post no swimming signs.

The standing water has become a beach attraction more so than even a rainbow that appeared later in the sky.

Rainbow over the rainwater that has collected during controversial dune project in Margate. @6abc pic.twitter.com/gc5tSsqiuy

"Now we have these waters again, nobody is here to pump them. Our kids will be coming down this weekend. All families come down the last two weeks in August and what are we to do?" resident Barbara Kracher said.

The controversial project on the dunes is part of a statewide effort to protect the coastline post-Sandy.

A judge ordered an eight day halt until the state Department of Environmental Protection and Army Corps of Engineers can come up with a better plan.

"On Friday, the Army Corps of Engineers filed to have this case in federal court, so we're kind of in limbo right now," Mayor Becker said.

The mayor says they predicted this would happen. Both sides will be back in court this week.