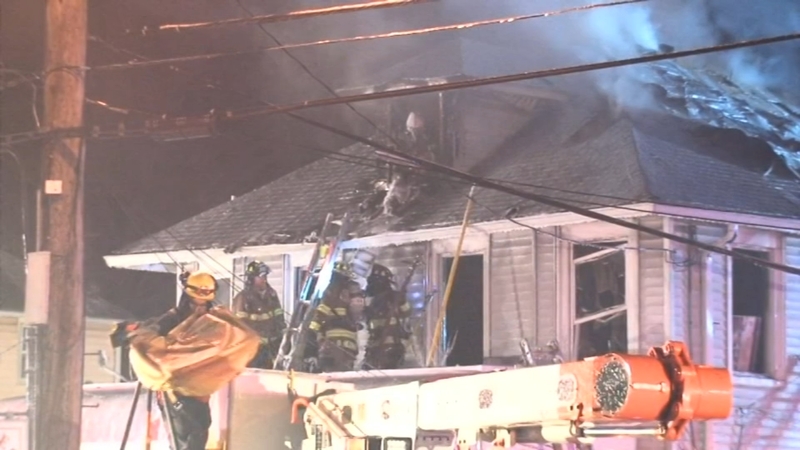 DELRAN, N.J. (WPVI) -- Firefighters used a large amount of foam to extinguish a fire at a pizza parlor in Burlington County that injured one person.

Foam covering the ground here after early morning fire in Riverside was put out. One person injured. The building has a family-owned pizza parlor business on first floor, apt unit on the second. pic.twitter.com/nRA95QSdNw

The fire started around 4:45 a.m. Tuesday at Milanese Pizza on the unit block of St. Miheil Drive in Delran.

Arriving firefighters were met with flames showing from the rear of the building.

They used foam and water to get control of the blaze.

The view from Chopper 6 showed the foam, looking like a snowfall, surrounding the pizza shop.

The building has the pizza parlor on the first floor and apartments above.

Milanese Pizza is a family-owned pizza parlor. Action News spoke with the owner, Dave Morrell, who says he's been in business since 1985.

“I’m out of a job”: Owner of Riverside pizza parlor that went up in flames this morning says he’s owned this business since 1985. It’s all his family knows. He is understandably in shock. Doesn’t know how bad the damage is. @6abc pic.twitter.com/g7OJdT7gDN

At least two people lived in the apartment.

Officials say both got out on their own. One was transported to Temple Hospital for burns.

Firefighters say the significant fire damage is partially due to a floor collapse which prevented them from going inside the building to contain the fast-moving fire.

Battalion Chief Kevin Keak of the Delran FD said, "What was challenging about this fire is that we did have some floor deterioration on the second floor, so we couldn't go into the floor or into the room that was apparently on fire."

As for Morrell, he says he has insurance. But worries about how long it'll take to get things back up and running.

"We have to get in there and find out what happened and I don't know if we will be able to reopen or not with the damage. We will see," said Morrell.

The condition of the person who was living on the second floor of this building is unknown.