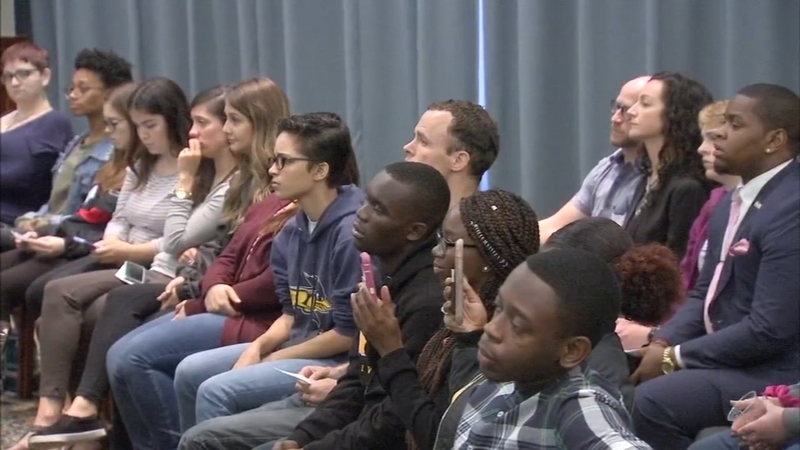 GLASSBORO, N.J. (WPVI) -- Students at Rowan University in South Jersey had a chance to air their concerns at a Friday afternoon forum after video of a traffic stop on campus went viral.

The forum open to all on campus. But notably, there was a piece missing, the police department at the heart of the discussion.

#RowanUniversity holds a forum for students & staff in response to video of 2 students being pulled over by officers with guns drawn. @6abc pic.twitter.com/VtFisdJIer

Police say the car that Hassan and Roberson were driving in matched the description provided by someone who reported a man with a gun. But they were not armed. After being stopped, searched and handcuffed, they were eventually let go.

"I'm mentally playing it back over and over again since it happened," said Alteif Hassan.

Hassan spoke to his peers today, but couldn't directly address the Glassboro Police Force which declined an invitation to the public forum.

Student Body President Rbrey Singleton said, "They told us that they were not available today."

When we asked the department about their absence, we were told the chief was away on vacation until next week. No other response.

Now an independent investigator who often works with National Action Network and the NAACP is now looking into the incident.

"I'm asking the attorney general who is the highest law enforcement in the state of New Jersey to take over this investigation," said Terrence Jones, civil rights investigator.

#Rowan Senior Altaif Hassan who was pulled over on campus at gunpoint Monday speaks to students and faculty in forum. @6abc pic.twitter.com/R4hiW63Q3e

The Glassboro Police Department says its officers responded appropriately, but the students involved and witnesses say they were traumatized by the ordeal.

The forum was hosted by student government and the office of social justice and inclusion.

Rowan University is planning on sharing the student body concerns aired today with the Mayor and Borough Council. They are hoping for a meeting with the Police in the near future.