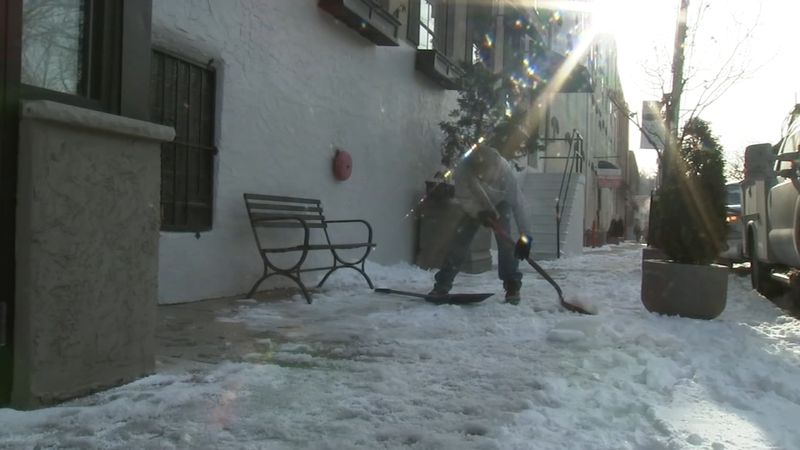 PHILADELPHIA (WPVI) -- The Philadelphia region is digging out from the weekend's nor'easter that dumped nearly two feet of snow in some areas.

Now, there's concern about icy conditions on roads as the snow begins to refreeze.

The Jersey Shore was the hardest hit with some areas getting nearly 20 inches of snow. Many schools in that area are on a 2-hour delay Monday morning.

Local crews brought out heavy equipment for cleanup in areas of Atlantic County.

Officials say they've plowed 90% of roads in Atlantic City, but it could take several additional days to finish the rest.

"We still have to do quite a few roads, triple passes, they're removing the snow. The big challenge right now is getting the snow out of the intersections, getting the snow where it has been piled up from the plows, and that's going to take several days," said Atlantic City Fire Chief Scott Evans.

Conditions are better in Philadelphia, but the bitter cold and the possibility of icy roads are a concern.

In Manayunk, business owners along Main Street focused on clearing snow and ice from the sidewalks. It took a little more effort as the snow started to freeze over.

With nearly 5,000 flights canceled across the country Saturday, many passengers found themselves back at Philadelphia International Airport on Sunday.

"We woke up and we're like thinking, 'OK, are the flights going to be delayed?' We were surprised that they weren't delayed," said Hita Patel of Marlton, New Jersey.

Philadelphia International Airport officials say there were more than 300 flight cancellations Saturday and about 95 delays.

Crews were working around the clock to remove mountains of snow from runways and taxiways.

SEE ALSO: Snowfall Totals: Here are the latest snow amounts in our region from the nor'easter

"I felt sorry for the workers because it was a big job to do, but they got it done. They did a great job," said Sherrie Carroll of Southwest Philadelphia.

Airport officials say there were more than 300 flight cancellations Saturday and about 95 delays. There was some improvement on Sunday with 50 cancellations and 104 delays.

"We rescheduled our flight. United gave us a free reschedule so we got to stay one more night in Colorado," said Mike Sophocles of Devon, Pennsylvania.