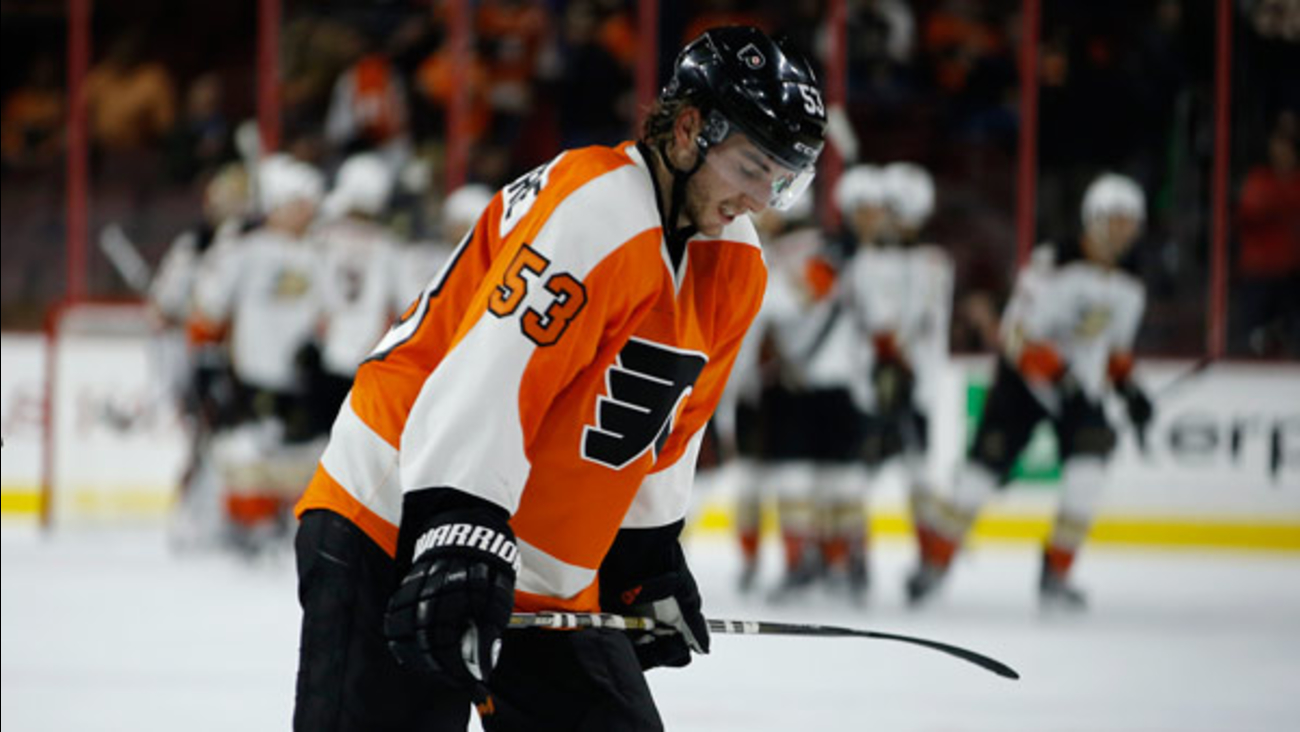 PHILADELPHIA -- Rickard Rakell had two goals, Chris Stewart scored on a penalty shot and Andrew Cogliano had an empty-netter to lead the Anaheim Ducks to a 4-1 victory over the Philadelphia Flyers on Tuesday night.

The Ducks responded to one of their worst defeats of the season - Monday's 6-2 blowout at Pittsburgh that snapped their six-game winning streak - with a strong game. Anaheim improved to 14-4-1 since Christmas while getting the victory in the second game of a seven-game road trip that will cover 7,300 miles in 13 days.

Wayne Simmonds scored for the Flyers, who dropped their third straight overall and fifth in the last six home games to further damage their playoff hopes. Philadelphia began the day five points out of a playoff spot, but behind five teams.

Frederik Andersen got the start against Philadelphia after John Gibson gave up all six of Anaheim's season-high goals allowed on Monday before getting pulled and made 28 saves.

The Ducks dominated the opening period. Rakell scored the first of his two goals with 9:33 left in the period on the power play. Steve Mason stopped the initial shot from the point, but Rakell pounced on the rebound and backhanded the puck high over a sprawling Mason.

Anaheim took a 2-0 lead 4 minutes later when Rakell's wrist shot from the left circle found its way under Mason's pad.

The Ducks padded their lead to three goals when Stewart converted a penalty shot with 7:12 left in the second period. After getting hooked by Nick Schultz while on a breakaway attempt, Stewart made Philadelphia pay when he beat Mason through the five-hole.

It was a physical period that saw Philadelphia's Brandon Manning and Anaheim's Corey Perry get bloodied during a skirmish that left Manning with a cut on his nose and sent Perry to the locker room with a cut over his left ear. Manning later got into a fight with Patrick Maroon, with both players landing hard punches. Simmonds' lip was bloodied when Cogliano's stick connected with his mouth, sending Cogliano to the penalty box for a high sticking double-minor.

And, finally, gloves were scattered everywhere on the ice with just over a minute remaining. There was mostly clutching and grabbing, although Philadelphia's Jakub Voracek landed in the box for roughing.

Simmonds got the Flyers on the board with 7:12 remaining in the third with just the third power-play goal in the last 28 chances against the Ducks, who entered as the league's top penalty-killing unit at 89.1 percent. Claude Giroux took the initial shot and Simmonds batted in the rebound after Andersen's initial save.

Cogliano scored into an empty net with 52 seconds left.

NOTES: The Flyers celebrated the 50th anniversary of the franchise with a pregame ceremony featuring Bernie Parent, Mark Howe, Bill Barber, Bobby Clarke and Donna Ashbee, who filled in for her late husband, Barry Ashbee. All five of those Flyers have had their jersey numbers retired. ... Cogliano played in his 674th straight game. ... Manning replaced healthy D Evgeny Medvedev on Philadelphia's back line. ... Flyers RW Ryan White took a shot off his foot in the third period and went to the locker room, but returned later in the period. ... Rookie D Shayne Gostisbehere extended his point streak to nine games with a third-period assist.