WPVI
EAST LAMPETER TWP., Pa. (WPVI) -- A school bus flipped on its side in a hit-and-run accident involving four vehicles in Lancaster County, sending more than a dozen people to the hospital, authorities said.

One of those people injured was a student who was ejected from the bus.

The Lancaster Mennonite school bus was taking students to school in East Lampeter Township on Wednesday morning when a sedan trying to pass two tractor-trailers and their escort vehicles hit the rear of one of the escort vehicles, the Lancaster County district attorney's office said.

The escort vehicle was pushed into the oncoming lane and sideswiped the bus, causing the bus to impact one tractor-trailer's load and tip onto its side, prosecutors said.

The 14 students, the bus driver and another driver were taken to a hospital, where a spokesman said two students with trauma injuries were being transferred to children's hospitals and everyone else was treated and released.

"Our focus has been on the physical and emotional well-being of our students rather than the cause and who is responsible," Hiller said. "We express concern for the two who are still in the hospital." 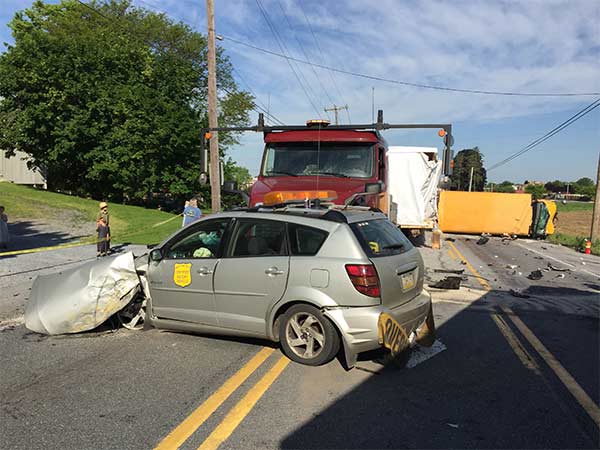 Authorities issued an alert for the newer-model light-colored sedan and its male driver, saying the vehicle was expected to have front-bumper damage.

"There's a very good possibility that this vehicle, as it was traveling eastbound prior to the accident scene, may have been passing other vehicles," township police Chief John Bowman said.