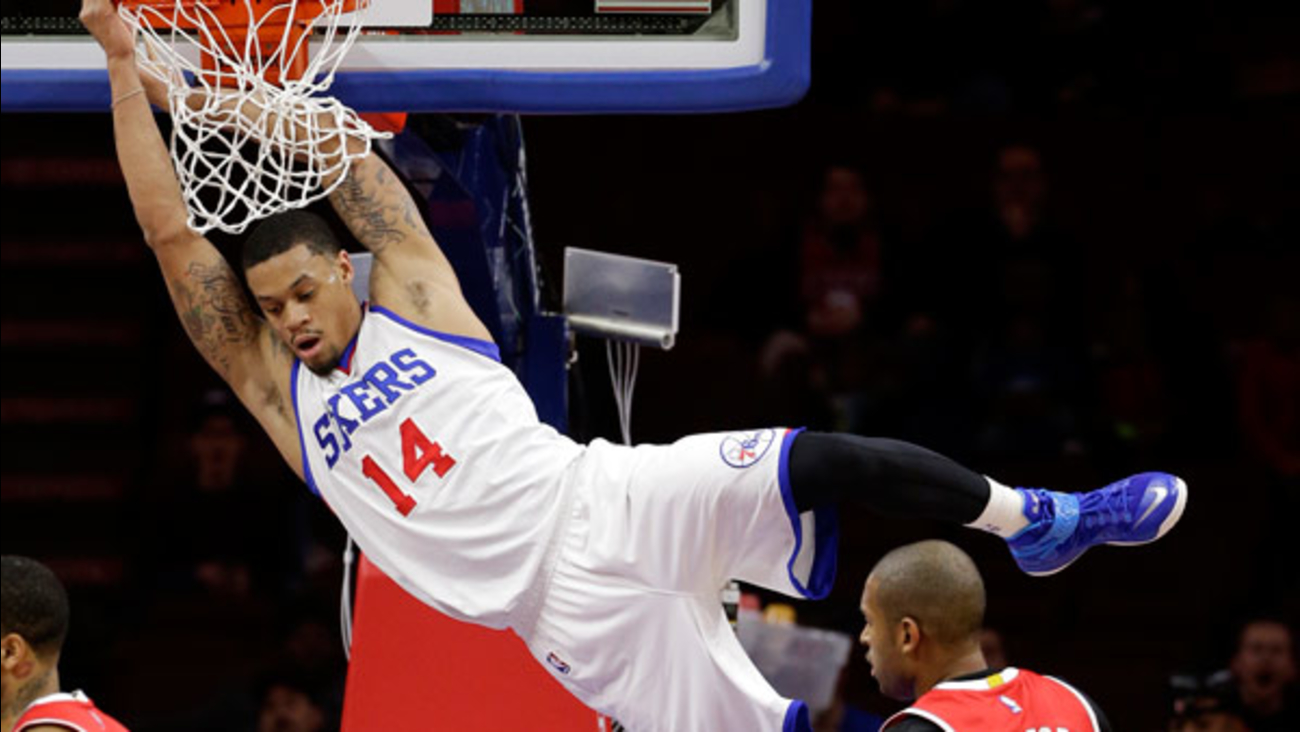 PHILADELPHIA -- Dominique Wilkins slapped Al Horford on his back during a brief locker room chat and dished out a few kind words.

Horford at last had a triple-double to add to his own highlight reel.

"Congratulations on your first one, brother," Wilkins said.

With Wilkins calling the action from the broadcast booth, Horford had 21 points, 10 rebounds and 10 assists to lead the Atlanta Hawks to their ninth straight win, 105-87 over the Philadelphia 76ers on Tuesday night.

The Hawks easily thumped the Sixers even while resting leading scorer Jeff Teague, Paul Millsap and DeMarre Carroll in a stretch of four games in five nights.

"It's always hard when you're missing some guys," coach Mike Budenholzer said. "You worry maybe about each guy not doing his job and continuing to play within the framework of the team. I thought our guys did, for the most part, a good job of sticking to what they do."

Horford did his even better, making 8 of 10 shots in just 29 minutes. He was pulled once he grabbed his 10th rebound.

The Hawks have won 23 of 25 and won their ninth straight road game. They are in first place this late in the season for the first time since they won the East in 1993-94.

Korver showed his former team why he's the best 3-point shooter in the league. He made one 3 late in the first half for a 43-35 lead, followed with another on the next possession, then watched as Mike Scott buried his own 3 to send the Hawks into halftime up 49-37.

The Hawks used those three 3s in the final 1:13 of the half to help turn a five-point lead into a rout. They are on their second nine-game winning streak of the season.

"It kind of feels like a college team in a lot of ways," Korver said. "In the NBA, the business side exists. It's on people's minds. But I feel like everyone here has really bought in."

Shelvin Mack's 3 late in the third helped stretch the lead to 21 points and the Hawks rested about the entire starting lineup for most of the fourth quarter. Mack had 12 points and 10 rebounds.

Michael Carter-Williams scored 20 points for the Sixers and K.J. McDaniels had 14. Guard Tony Wroten did not return after he sprained his right knee. The lowly Sixers had won three of four and zipped past New York in the Eastern Conference standings.

"They make everything so simple that you've really got to stay disciplined on defense," Carter-Williams said. "We didn't tonight and that's why we lost."

Hawks: At 35, Hawks forward Elton Brand knows his career is winding down. "I'm enjoying riding the bus," he said. "When I go to Utah, I take a walk and try and get a lunch in the mountains or something because I don't know if I'll be back here." Brand played four seasons with the Sixers and helped lead them to Game 7 of the 2012 Eastern Conference semifinals. Brand said it's been hard watching the Sixers struggle and wondered how much better off the franchise would be today had it stuck with a promising group of young players. "I see the pieces around the league," Brand said. "Lou Williams getting 30. Andre Iguodala having a great glue-guy personality. Even (Mo) Speights is getting 20 off the bench. (Nik) Vucevic (in Orlando) is 30 and 15 some nights."

76ers: What tank? The Hawks are proof that teams don't necessarily have to take Philadelphia's lengthy rebuilding plan to rise to the top of the conference. Sixers coach Brett Brown said the Hawks have built a team "with a bunch of really good guys that are a bunch of really good players." ... The 76ers have kept an eye on second-round pick Jordan McRae's progress in Australia. There are no immediate plans for McRae to play in the NBA this season.

Led by Horford and Mack, the Hawks outrebounded the Sixers 47-35. The Sixers have been outrebounded by double-digits in each of the past two games and 13 times overall this season (1-12 record).