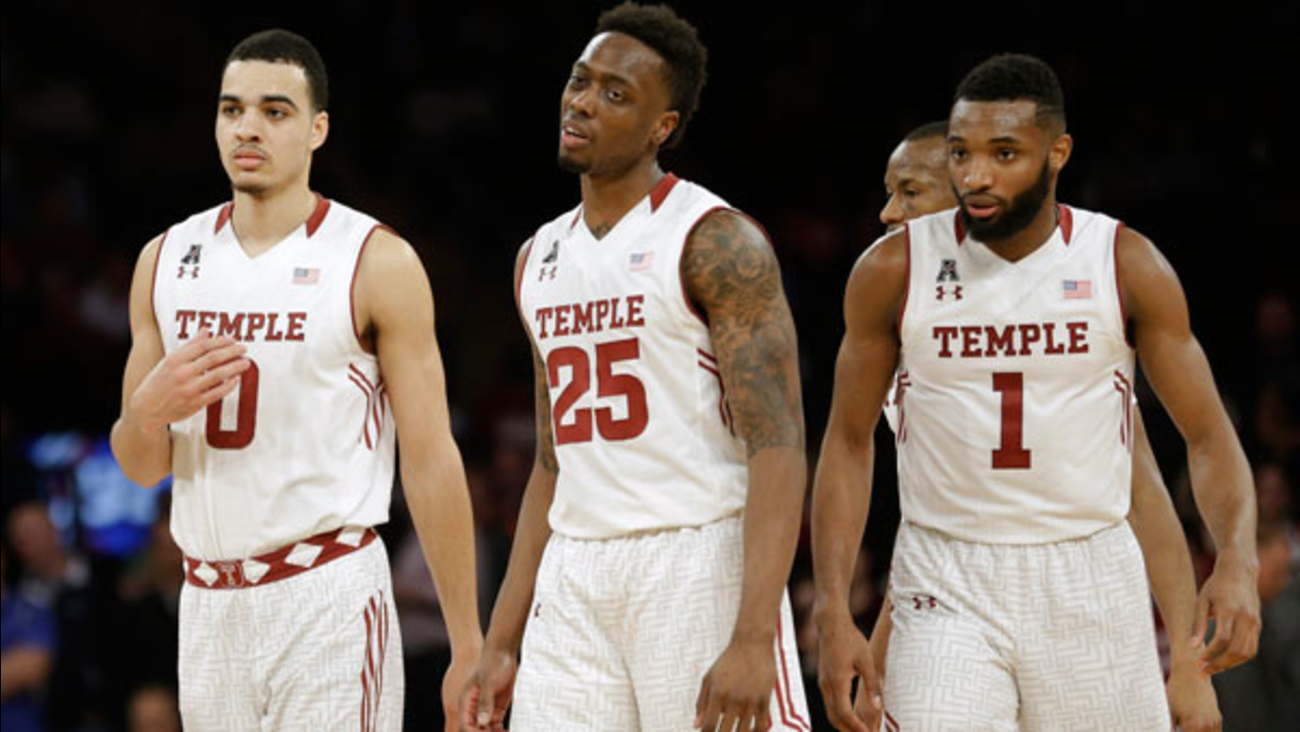 Temple's Obi Enechionyia (0), Quenton DeCosey (25), and Josh Brown (1) react during the second half of a semifinal against Miami at the NIT college basketball tournament. (AP Photo/Frank Franklin II)

NEW YORK -- Sheldon McClellan scored 12 of his 16 points in the second half, and short-handed Miami rallied to beat Temple 60-57 on Tuesday to reach the NIT championship game.

Already without point guard Angel Rodriguez, the Hurricanes lost center Tonye Jekiri to a concussion early on and trailed by 11 late in the first half.

The Owls' Quenton DeCosey was off on a potential tying 3-pointer at the buzzer as they went 0 for 15 from beyond the arc in the second half. The Hurricanes held Temple to 22.5 percent shooting overall after halftime.

After missing six of his first eight shots, McClellan hit two 3s in a row with about 8 minutes left to put Miami in front for good.

Owls freshman Obi Enechionyia set career highs with 17 points and five blocks. But leading scorer Will Cummings, who had averaged 22 points in the NIT, shot just 3 for 15.

Rodriguez missed his third straight game because of a nagging wrist injury. Jekiri, who scored two early baskets, was inadvertently struck in the face just over six minutes in and did not return. The two had combined to average more than 20 points per game.

Miami faces Stanford or Old Dominion on Thursday, seeking its first NIT title. The Owls were the top seed in the NIT as the first team left out of the NCAA Tournament.

DeAndre Burnett missed the front end of a one-and-one with 13.2 seconds left for the Hurricanes, and they decided not to foul, giving DeCosey the chance to send the game to overtime.

Miami: McClellan had 11 rebounds and was the only Hurricanes player in double figures.

Temple: Forward Jaylen Bond limped off with less than 8 minutes left and didn't return. ... With Jekiri out, the 6-foot-9 Enechionyia had his way inside. He also matched a career high with eight rebounds.