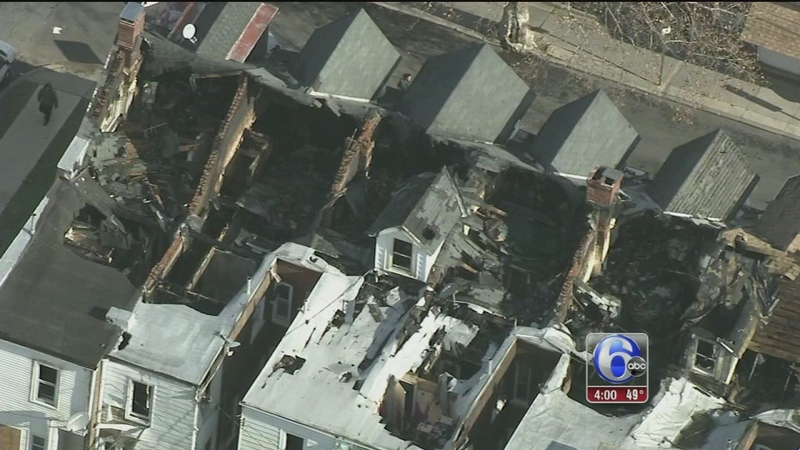 ALLENTOWN, Pa. (WPVI) -- Nearly two dozen people were forced from their homes after a massive fire tore through Allentown on Thursday night.

In all, 23 people from seven families were displace by the blaze that destroyed six homes and damaged two others.

He's thankful his home didn't receive extensive damage, but concerned about his neighbors who lost everything.

Firefighters say it was a struggle battling the fire. They say it was spreading in the roof tops and the wind was fanning the flames.

"Wind drives fire, so it pushes it and that helps it spread house to house. The wood is 100 years old and hasn't seen the light of day in 100 years, that is dry," said Battalion Chief Bill Held of the Allentown Fire Department. "Once the fire gets up in there, you're against it and doing the best you can at that point to stop it."

Frightened neighbors could only look on, and prayed their home wouldn't be next.

"My main concern was having it spread because sparks were flying," said Richard Hillegass.
Jessica Rivera doesn't even live in the neighborhood but happened to drive by the fire. She says when she saw the victims, she had to help.

"It had taken over pretty much the row. We were devastated, so we were like 'Okay, who are the families involved.' We went and wrote down as many names and numbers and sizes of clothes I could get and all day today I did a Facebook Live and people have been messaging me their addresses and I have been picking up donations, and my trunk is filled," Rivera said.

More than five hours after it started, firefighters finally got the upper hand and had it under control by 2:32 a.m. Friday.

The Allentown Fire Marshal's Office is still working to determine how the blaze started.