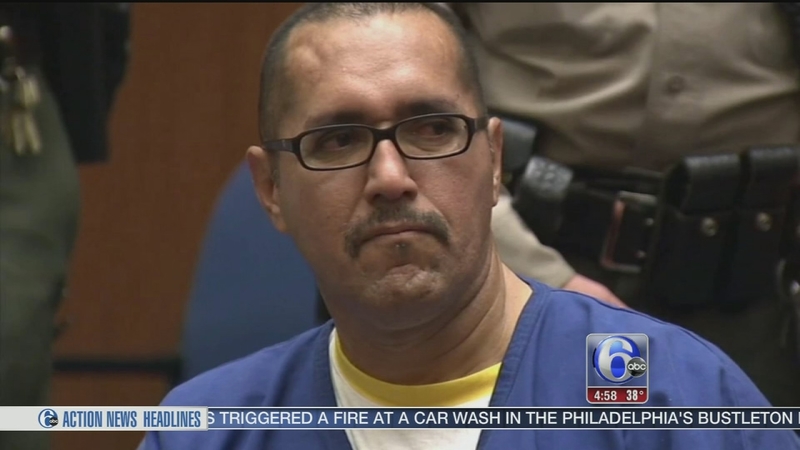 LOS ANGELES -- Even after Luis Vargas was sent to prison for a rape conviction that would mean he would probably never be free, his young daughter never stopped believing in him.

After 16 years, Crystal Nunez-Vargas finally heard the words she had been waiting for Monday when a judge ordered her father released after DNA evidence linked the crimes to a serial rapist on the FBI's most wanted list.

Her father, wearing a blue jail uniform and handcuffed only minutes earlier, broke down, put his hand to his forehead and covered his eyes as Superior Court Judge William Ryan ruled that new evidence "unerringly" pointed to Vargas' innocence and tossed out the convictions.

"I've believed in my father's innocence the day he told me he was innocent," Nunez-Vargas said after the brief hearing, becoming emotional and dabbing her eyes as she spoke with reporters.

Vargas, 46, who was taken back into custody because of immigration issues, told his lawyers to tell his family not to worry and that he would be home soon.

"I think he's let go of any bitterness and he's just happy to move forward and be reunited with this family, hopefully for Christmas," said attorney Raquel Cohen of the California Innocence Project.

His lawyers expect he'll be released by immigration authorities because he was a legal resident at the time of arrest and the matter of the conviction is now vacated.

Vargas was serving a term of 55 years to life in prison when he contacted the innocence project at California Western School of Law in 2012 and said he thought he was wrongly convicted of crimes that were the work of the so-called Teardrop Rapist.

The notorious predator known for a tattoo of a teardrop under his eye has been linked by DNA to 11 crimes and is suspected of 35 across the Los Angeles area, the innocence project said.

Vargas has a similar tattoo and he was accused of crimes that fit the same pattern - attacks on girls and women walking to school her work in the early morning.

Vargas was convicted of kidnapping, forcibly raping and sodomizing one woman and attempting to rape two others between February and June 1998.

DNA testing methods were not as sensitive at the time of the trial and the convictions hinged on positive identifications by the three victims.

Prosecutors said the three assaults were so similar, they were "signature crimes" that could only be committed by the same person. The women all corroborated each other by pointing to Vargas, who had a previous rape conviction.

The judge noted that their initial identifications, however, were tentative and inconsistent in describing their assailant.

"This was a shaky witness identification case," said attorney Alex Simpson, of the California Innocence Project. "It is the No. 1 factor in wrongful convictions across the country."

Jurors disregarded Vargas' alibi witnesses, including the manager of a bagel shop, who said he was working there the mornings of the attacks.

With advances in DNA technology, his lawyers were able in show that genetic evidence from the forcible rape was linked to the Teardrop Rapist and not Vargas.

Prosecutors concluded it was a case of mistaken identity and that new evidence had undermined their case, Deputy District Attorney Nicole Flood said in a letter to the judge.

Vargas' daughter, who was 10 when he was taken away, said it was hard growing up without a father and she often cried herself to sleep.

She got legally married, but she postponed the ceremony so they can share one of those rites.