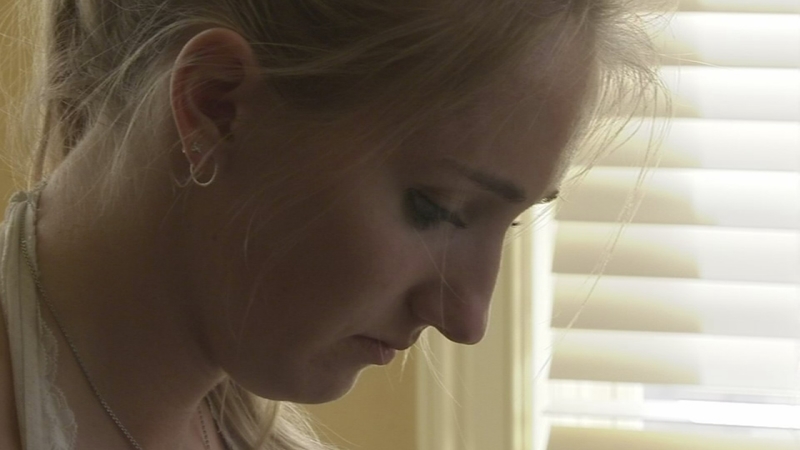 PHILADELPHIA (WPVI) -- A Bucks County man is awaiting sentencing next month for felony stalking. His victim was nearly 40 years younger than him and his child's best friend.

Now, that teenager and her family are sharing their horrifying ordeal exclusively with Action News.

The Central Bucks High School senior says her ordeal began in 2013 when 55-year-old Shane Holderer of Plumstead began reaching out to her via social media.

Initially, it was innocent.

"He was my best friend's dad," the girl said.

But then things changed.

"It soon escalated into a sexual nature," the girl's mother said.

The family called police. The then-51-year-old ended up pleading guilty to a misdemeanor stalking charge and was sentenced to counseling and probation.

The family thought their nightmare was over.

"We were told at the time that would protect her," the girl's mom said.

Three years went by. Then, on the morning of September 25th, the girl saw a re-tweet on her phone.

"I was like 'Who is that?' I clicked on the account and saw thousands and thousands of tweets," she said.

Unbeknownst to her, Holderer was stalking and stealing from her social media accounts for three years.

"It's an emotional distress that I just can't even describe," said the girl's mother.

There were thousands of tweets. Many sexual in nature. One picture was tagged with the request for a sex act and the words "let me send you to paradise."

On Instagram, there were pictures with arrows pointed at her body parts.

"It changed everything for the rest of my life, almost, because I don't know if this problem is ever going to go away," she said.

Police took over the girl's social media accounts, set up a sting, and busted Holderer at a Doylestown Starbucks where he thought he was meeting the 17-year-old on November 17th.

On Twitter, he wrote that day, "get u a boy who kisses u at red lights or Starbucks."

He pleaded guilty to a felony stalking charge last month, but that troubled the girl's family.

"Quite frankly, the stalking laws need to be updated across this country," McAndrew said.

McAndrew believes lawmakers should strengthen stalking laws by incorporating sentencing enhancements for crimes against minors and/or those sexual in nature. That could lead to longer sentences, increased probation monitors and registration as an offender.

When asked if he thinks Holderer will stop, McAndrew replied, "No, I don't."

The 17-year-old girl heads to college next fall. She's looking forward to a fresh start. Sadly, Holderer's obsession lingers in her mind.

Holderer's sentencing is next month. He could get as little as probation or as much as 7.5 years in prison.

Cyber stalking experts say there's not much the family could have done. Kids need to be vigilant and report suspicious activity to their parents, which the girl in this case did.
Related topics:
special reportsocial mediacyberbullyingaction news investigation
Copyright © 2021 WPVI-TV. All Rights Reserved.
More Videos
From CNN Newsource affiliates
TOP STORIES