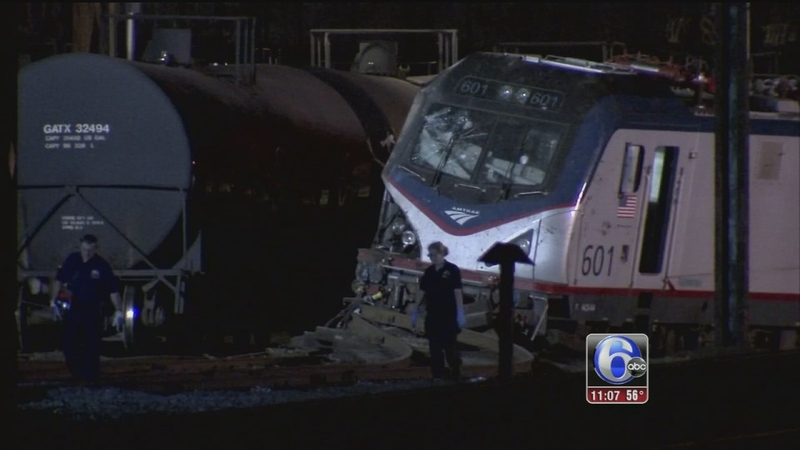 WASHINGTON -- An emotional Amtrak CEO pledged to lawmakers Tuesday that safety technology that could have prevented a deadly derailment last month in Philadelphia will be put into operation, while Democrats and Republicans exchanged barbs over whether Congress or the Obama administration is most to blame for railroads not installing the technology.

"We are responsible for the incident and its consequences," Joseph Boardman told a House transportation committee hearing. His voice breaking, Boardman said equipping trains with positive train control, a technology that can prevent trains from derailing because of excessive speed, is the "single greatest contribution my generation of railroaders can make."

Amtrak had already installed the technology on tracks it owns in the Northeast Corridor from Boston to Washington, but it wasn't in operation when Amtrak Northeast Regional train 188 entered a curve in Philadelphia at 106 mph. The speed limit for the curve is 50 mph. Eight people were killed and about 200 injured in the derailment.

Amtrak's positive train control system relies on transponders, while most other railroads are installing systems that use GPS and wireless technology. The systems automatically slow or stop trains if they are traveling too fast, about to collide with another train, disobey signals or enter an area where crews are working.

Several Democrats blamed a lack of funding in part for Amtrak's troubles, pointing to a $21 billion backlog in capital improvements and to bridges and a tunnel that are more than 100 years old and still in use because there is no money to replace them. Republicans have long sought to reduce federal aid to Amtrak. A GOP spending bill approved by a House panel the day after the accident would cut $290 million from Amtrak's annual federal subsidy.

The train cars involved in the derailment, which were severely mangled, were purchased beginning in 1975 and weren't built to modern occupant protection standards, Boardman said. They haven't been replaced because the railroad is still trying to replace cars built in the 1940s, he said.

Rep. Michael Capuano, D-Mass., complained that some members of Congress have introduced legislation to give all railroads a blanket 5- to 7-year extension to install positive train control.

The administration has asked Congress to instead grant it the power to extend the deadline on a case-by-case basis in order to keep pressure on railroads to install the systems, but so far Congress hasn't done that.

Sarah Feinberg, acting head of the Federal Railroad Administration, told an industry-government safety advisory committee last week that the agency will use all its power to force railroads to install the systems, including fines and orders to shut down operations.

But Rep. John Mica, R-Fla., a leading Amtrak critic, chastised federal regulators, saying installation of positive train control has been slowed by the actions of another federal agency, the Federal Communications Commission, which has been slow to grant railroads the radio spectrum they need to make the systems work.

The National Transportation Safety Board said in a preliminary report released Tuesday that investigators still don't know whether the engineer involved in the Philadelphia derailment was on his cellphone before the speeding train crashed. It also remains unclear whether damage to the windshield was caused by the wreck or an object thrown at the train, the report said.

The NTSB has said engineer Brandon Bostian, who suffered a head injury in the crash, has been cooperative but says he cannot recall the moments before the accident. The two-page preliminary report estimates damage from the May 12 crash at more than $9.2 million.