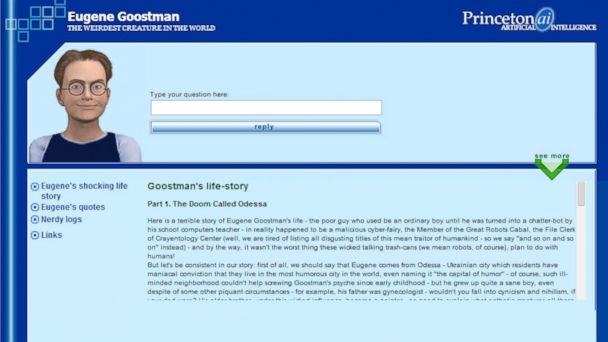 Like many 13-year-old boys, Eugene Goostman claims to be a know-it-all.

The one thing that separates him from his peers, however, is that Eugene is a supercomputer.

The artificially intelligent "teenager" became the first computer to pass the famous 65-year-old Turing Test by successfully duping enough judges into believing they were conversing with a real human, according to the University of Reading, which organizes the annual test.

Who Was Alan Turing? And Why Did Queen Elizabeth Grant Him A Pardon?

The experiment is based on a question and answer test Turing devised in 1950 that asks, "Can machines think?"

It investigates whether people can detect if they are conversing with a human or a computer. In order to pass, a computer must be mistaken for a human by 30 percent of judges during a series of five-minute keyboard conversations.

Eugene, who claimed to be a teenager from Ukraine, convinced 33 percent of a judging panel that he was human.

"Our main idea was that he can claim that he knows anything, but his age also makes it perfectly reasonable that he doesn't know everything," Eugene's creator, Vladimir Veselov, said in a statement. "We spent a lot of time developing a character with a believable personality."

Among the "lies" put forth by Gootsman that successfully duped the judges were that he likes hamburgers, candy and that his father is a gynecologist, The Verge reported.

The engineers behind Eugene have put him online for anyone to converse with him, however, as of the time of writing, Eugene was down and unavailable for an interview with ABC News.

Hilarious Video: What Happens When Kids Interact With Old Computers

The achievement was marked as a milestone in computer science by Kevin Warwick, a visiting professor at the University of Reading.

"It is important to understand more fully how online, real-time communication of this type can influence an individual human in such a way that they are fooled into believing something is true ... when in fact it is not," Warwick said.

Turing's test has remained the standard by which artificial intelligence is measured. The British mathematician, who helped defeat the Nazis by cracking their secret codes and laid the groundwork for modern computer science, was posthumously pardoned by Queen Elizabeth last year for a 1952 conviction for being gay.

Every computer today, from cells phones to those aboard the International Space Station, owe their existence to the "Turing Machine," the first modern computer to run interchangeable software.

Despite his contributions to the war effort and to science, Turning was charged with "gross indecency" in 1954, under laws that at the time criminalized homosexuality. Rather than serve prison time, Turning agreed to a form of chemical castration, in which he was injected with female sex hormones. Later that year he killed himself.