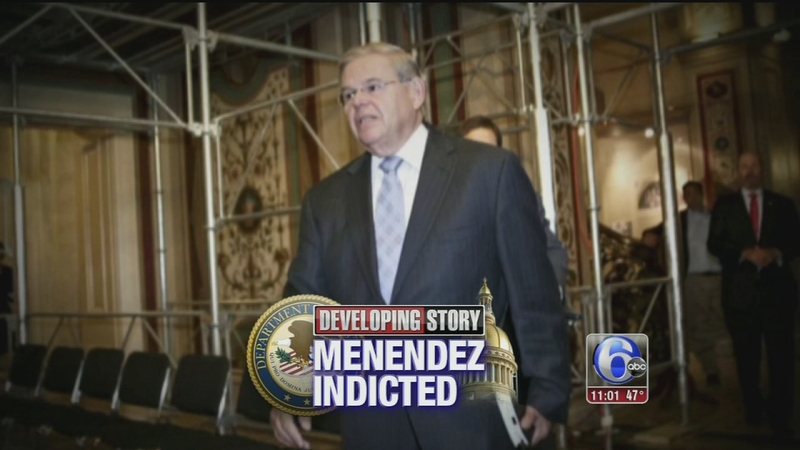 WASHINGTON -- Sen. Bob Menendez, the son of Cuban immigrants who rose to become one of the highest-ranking Hispanic members of Congress, was charged Wednesday with accepting nearly $1 million in gifts and campaign contributions from a longtime friend in exchange for a stream of political favors.

Menendez predicted he would be "vindicated" and, in a defiant statement before reporters and cheering supporters Wednesday evening, said, "This is not how my career is going to end."

"I am not going anywhere. I'm angry and ready to fight because today contradicts my public service and my entire life," he said.

A federal grand jury indictment accuses the New Jersey Democrat of using the power of his Senate seat to benefit Dr. Salomon Melgen, a wealthy Florida eye doctor who prosecutors say provided the senator with luxury vacations, airline travel, golf trips and tens of thousands of dollars in contributions to a legal defense fund.

The indictment from a grand jury in Newark contains 14 counts - including bribery, conspiracy and false statements - against Menendez and also charges Melgen, a political donor to Menendez and other Democrats.

Menendez is scheduled to appear Thursday in federal court in Newark. Melgen's attorney did not immediately return a call seeking comment Wednesday.

The criminal charges cloud the political future of the top Democrat - and former chairman - of the Senate Foreign Relations Committee, who has played a leading role on Capitol Hill on matters involving Iran's nuclear program and U.S. efforts to improve ties with Cuba. Menendez said Wednesday he would temporarily step aside from his role as top Democrat on the committee.

Senate Minority Leader Harry Reid, D-Nev., thanked Menendez for stepping down and said he "should not be judged until he has his day in court."

The indictment will almost certainly lead to a drawn-out legal fight between Menendez and a team of Justice Department prosecutors who have spent years investigating his ties to Melgen. It will require prosecutors to prove that a close and longtime friendship between the men was used for criminal purposes and is likely to revive the legal debate about the constitutional protections afforded to members of Congress for acts they take in office, which Menendez has already signaled as a possible line of defense.

The indictment marks the latest development in a federal investigation that came into public view when federal authorities raided Melgen's medical offices in 2013.

Menendez had already acknowledged that he had taken several round-trip flights to the Dominican Republic on Melgen's luxury jet that, initially, were not properly reimbursed. But the 68-page document spells out many additional gifts, such as a Paris hotel stay and access to a Dominican resort, that prosecutors say were never reported on financial disclosure forms.

In exchange for those and other gifts, prosecutors allege, Menendez sought to smooth approval of the visa application process for several of Melgen's foreign girlfriends, worked to protect a lucrative contract Melgen held to provide cargo screening services to the Dominican Republic and intervened in a Medicare billing dispute on the doctor's behalf worth millions of dollars.

In 2013, in an email exchange one day after Melgen and Menendez had golfed together in Florida, Menendez told his chief counsel to contact U.S. Customs and Border Protection to ask the agency to stop donating shipping container monitoring and surveillance equipment to the Dominican Republic, according to the indictment. Melgen had a contract to provide exclusive cargo screening in Dominican ports, and the CBP plan would have hurt his financial interests, prosecutors say.

In advocating for Melgen's business interests, prosecutors say, Menendez pursued meetings with the heads of executive agencies and tried to solicit the help of other U.S. senators.

Menendez has acknowledged taking actions that could benefit Melgen, among them contacting U.S. health agencies to ask about billing practices and policies. But the lawmaker has said he did nothing wrong and that the interactions he had with the doctor were reflections of a close friendship dating two decades.

"We celebrated holidays together," he told reporters last month amid news reports of a looming indictment. "We have been there for family weddings and sad times like funerals and have given each other birthday, holiday and wedding presents, just as friends do."

Melgen himself came under renewed scrutiny when government data last year showed he had received more in Medicare reimbursements in 2012 than any other doctor in the country.

An aide to Sen. Amy Klobuchar, D-Minn., said Wednesday night that she would return campaign donations she received from Menendez and Melgen. Klobuchar matches the description of a lawmaker called "Senator 1" in the indictment, though she was not accused of wrongdoing.

According to the Senate Historical Office, Menendez is the 12th senator to be indicted and the first since the late Sen. Ted Stevens, R-Alaska, was indicted in 2008 on charges of not reporting hundreds of thousands of dollars' worth of home renovations. Stevens was found guilty but the Justice Department later dismissed the case and said prosecutors withheld evidence that would have been favorable to the defense.

Menendez is also the second New Jersey senator to be indicted. Harrison Williams Jr., a Democrat, was indicted in 1980 on corruption charges and convicted of bribery and other counts the following year. Williams resigned before the Senate could vote on whether to expel him.

Menendez, 61, joined the Senate in 2006 after serving more than a decade in the House of Representatives.

Associated Press writers Jill Colvin in Newark, N.J., and Alan Fram and Erica Werner in Washington contributed to this report.