WPVI
PHILADELPHIA (WPVI) -- A rally called "Philly is Baltimore" that began Thursday afternoon and extended well into the evening ended with only 3 arrests and no damage to property.

It began at Philadelphia City Hall. Organizers said the purpose was to show solidarity with protestors in Baltimore in the wake of Freddie Gray's death.

As the sun went down, the demonstration took on a different tone.

PHOTOS from the rally 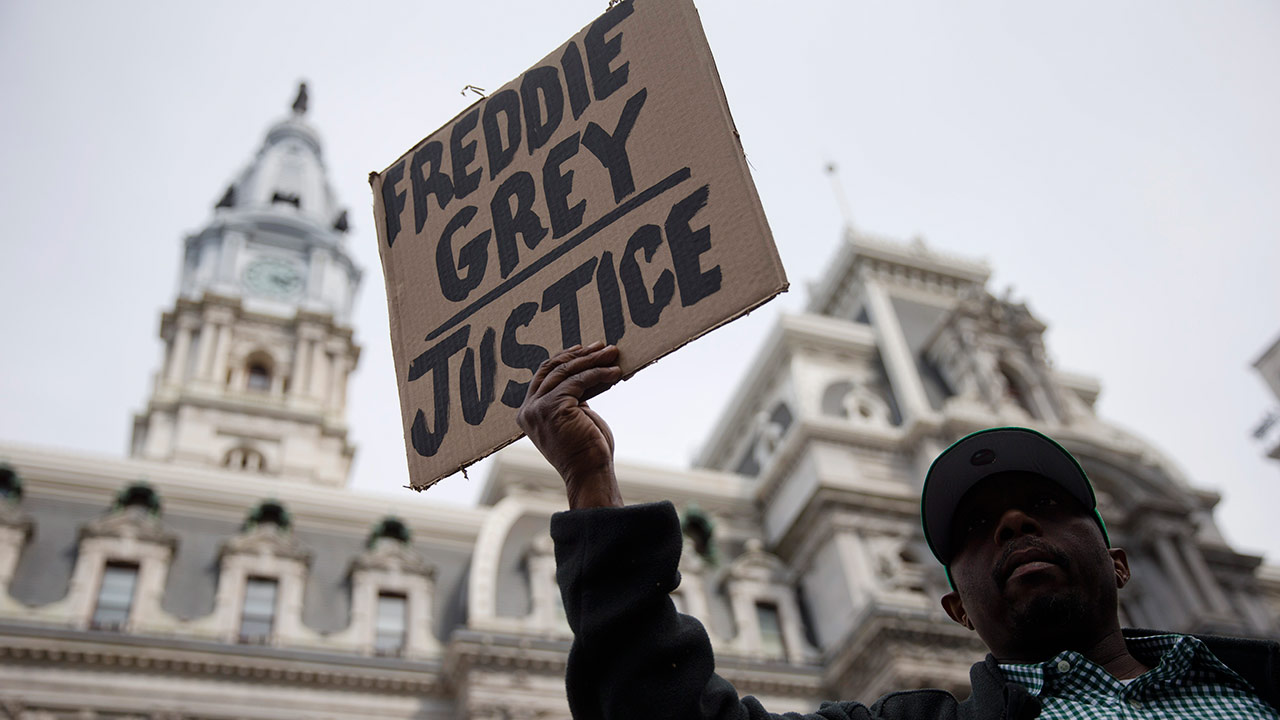 PHOTOS: "Philly is Baltimore" rally
Hundreds took to the streets of Center City for a rally and peaceful demonstration to show solidarity for the City of Baltimore in the wake of Freddie Gray's death.

There were some tense moments between marching protesters and police trying to keep them off the Vine Street Expressway.

The demonstrators tangled with police, who refused to let them move onto the highway.

Some bottles and other objects were thrown at the officers. Some officers also suffered minor injuries.

Three people were arrested during the incident. All three had been released by Friday morning.

Despite the skirmish, police said, the demonstration remained peaceful overall.

"It got a little bit dicey around Broad and Vine. There were some people who wanted to get onto the highway. That's not safe to them or the motorists. They didn't agree with that, but we were able to dissipate the crowd and get them to move on," said Deputy Police Commissioner Richard Ross, Philadelphia Police.

At times the crowds dwindled but continued marching into the night, blocking traffic and chanting in the streets.

Below is a timeline of the demonstration:

UPDATE 11:13 P.M.: The majority of demonstrators have dispersed after the march which lasted more than six hours.

Marchers are dispersing. This was a fantastic success story. Huge credit to marchers and mad respect for @PhillyPolice. PHILLY ROCKS!

UPDATE 10:22 P.M.: Some marchers continue to rally outside 9th District police station while others disperse

Marchers staged outside 9th District and are chanting "Free our brother". The belief is that person arrested during skirmish brought here.

UPDATE 9:22 P.M.: Marchers tried to make their way into the Four Seasons Hotel but decided to keep going.

The Elite Highway Patrol has arrived. The crowd at the 4 Seasons has opted to move on. Very vocal but still peaceful. pic.twitter.com/TUu1QpsLA6

Protestors now banging on doors of Fed Detention Center chanting You are not alone. #BREAKING pic.twitter.com/S9g165QX9U

UPDATE 8:17 P.M.: Numbers dwindle down as demonstrators move through Chinatown.

UPDATE 8:01 P.M.: Reports of at least two arrests as police line holds demonstrators back at Broad and Vine.

UPDATE 7:48 P.M.: Demonstrators being held back by police as they try to turn onto Vine Street Expressway.

UPDATE 7:03 P.M.: Rally now at the intersection of 16th and Market streets.

---
UPDATE 6:27 P.M.: "Philly is Baltimore" march has reached Rittenhouse Square. Demonstrators now gathering on 18th Street next to the park.

UPDATE 6:22 P.M.: Demonstrators march through traffic on Locust Street as motorists look on.

Protestors March thru traffic west on Locust as startled motorists look on pic.twitter.com/SfuwC58qzZ

100's March on streets of center city in Philly is Baltimore rally pic.twitter.com/MZu0hgm7HV

Philly is Baltimore demonstrators begin to march at 15 & JFK pic.twitter.com/mKDZUDXwXg

UPDATE 5:54 P.M.: All sorts of speech is being heard at the rally. Some calling for unity, while other are taking a more serious tone, denouncing police in vulgar terms.

UPDATE 5:35 P.M.: The Philadelphia Police Mounted Patrol is assembling at the scene of the rally.

UPDATE 5:27 P.M.: Philadelphia Police Deputy Commissioner Richard Ross in command at the rally. All is peaceful so far.

UPDATE 5:10 P.M.: The crowd continues to grow at Dilworth Park. The group is expected to march through Center City.

Terry Caldwell of Germantown is one of the participants at the rally. He tells Action News, "I feel like this problem, though it gets so much media attention, it still goes ignored by so many people. And who is to say that I won't be the next victim? I look just like the victims, so..."

The crowd gets bigger at Center City protest. View from above. pic.twitter.com/LqllZkE2fE

UPDATE 5:02 P.M.: Local clergymen have gathered at the rally to promote peace and non-violent protest.

Local clergymen at the rally to promote peace and non-violent protest#mapit pic.twitter.com/eGdBYG3CxW

UPDATE 4:30 P.M.: A growing crowd is gathering in front of City Hall, and another group is now marching down Broad Street to meet with the other demonstrators.