The flakes started falling in the morning hours and didn't subside until after 1 p.m.
WPVI
By TaRhonda Thomas 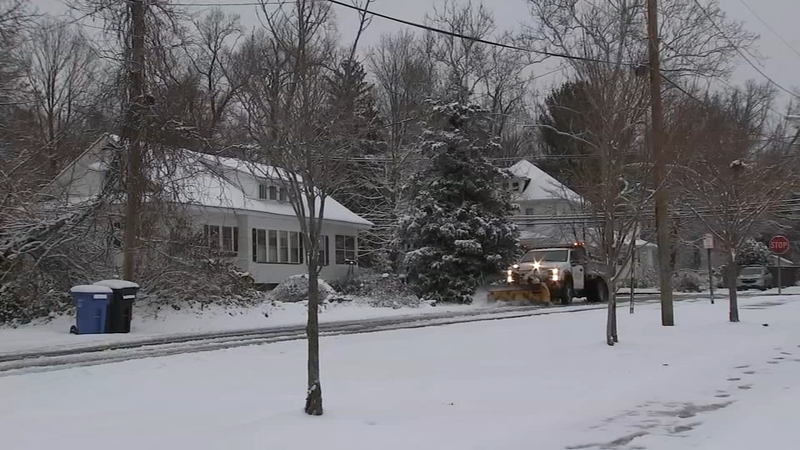 SEWELL, New Jersey (WPVI) -- Before Ken Gregg could blow the snow off the sidewalks and driveways of his home and his mother-in-law's home, he had to practically blow the dust off of his snowblower.

"I don't even think I took it out last year. Last year I didn't even need it," said Gregg of the snowblower, adding that a shovel was enough to clear any snow that fell last year.

On Monday, along with other areas of the Garden State, Mantua Township welcomed back substantial snowfall.

Along the coast in Ocean City, roughly 14 inches of snow was recorded. In counties closer to Philadelphia, the totals ranged from 2.8 inches to nearly 7 inches of snow, according to the National Weather Service.

SNOWFALL TOTALS
Over a foot of snow difference between Philadelphia and the beaches of Atlantic and Cape May Counties. Click here to see other totals from the National Weather Service: https://t.co/b3VQNeBVjo pic.twitter.com/ofBN50Ee5T

The flakes started falling in the morning hours and didn't subside until after 1 p.m. The main roads and side streets were covered, making driving difficult during the morning commute.

Isabelle Ley saw the same types of conditions as her husband drove her to an early-morning appointment.

"It's been slippery," she said. "He slipped a couple of times."

The first winter storm of the season really packed a punch along the Jersey shore.

Snowplows spent the morning going down major roads and side streets in the township, clearing much of the snow.

"They are on top of it," said Jerry Jones of plow truck drivers in the area. "They salted, plowed whatever needs to be done."

But some chunks of ice and snow remained by the end of the day, increasing the potential for frozen roads in the Tuesday morning commute.

"You've got to go slow," said Jack Revoir as he drove in his black pickup truck with his dog, Phoebe.

As drivers urged caution, residents who stayed at home saw the upside of the snowstorm.

"Oh, it's perfect. It's nice and light," said Craig Rudisill as he shoveled the lightweight snow out of his driveway.

"We have four grandkids and I know they're enjoying it for sure," he added.