WPVI
PHILADELPHIA (WPVI) -- A preliminary examination of the blown jet engine of the Southwest Airlines plane that set off a terrifying chain of events and left a businesswoman hanging half outside a shattered window showed evidence of "metal fatigue," according to the National Transportation Safety Board.

Passengers scrambled to save the woman from getting sucked out the window that had been smashed by debris. She later died, and seven others were injured.

The pilots of the twin-engine Boeing 737 bound from New York to Dallas with 149 people aboard took it into a rapid descent Tuesday and made an emergency landing in Philadelphia. Oxygen masks dropped from the ceiling and passengers said their prayers and braced for impact.

What a flight! Made it!! Still here!! #southwest #flight1380 pic.twitter.com/Cx2mqoXVzY

"I just remember holding my husband's hand, and we just prayed and prayed and prayed," said passenger Amanda Bourman, of New York. "And the thoughts that were going through my head of course were about my daughters, just wanting to see them again and give them a big hug so they wouldn't grow up without parents."

The dead woman was identified as Jennifer Riordan, a Wells Fargo bank executive and mother of two from Albuquerque, New Mexico. She was the first passenger killed in an accident involving a U.S. airline since 2009. The seven other victims suffered minor injuries. 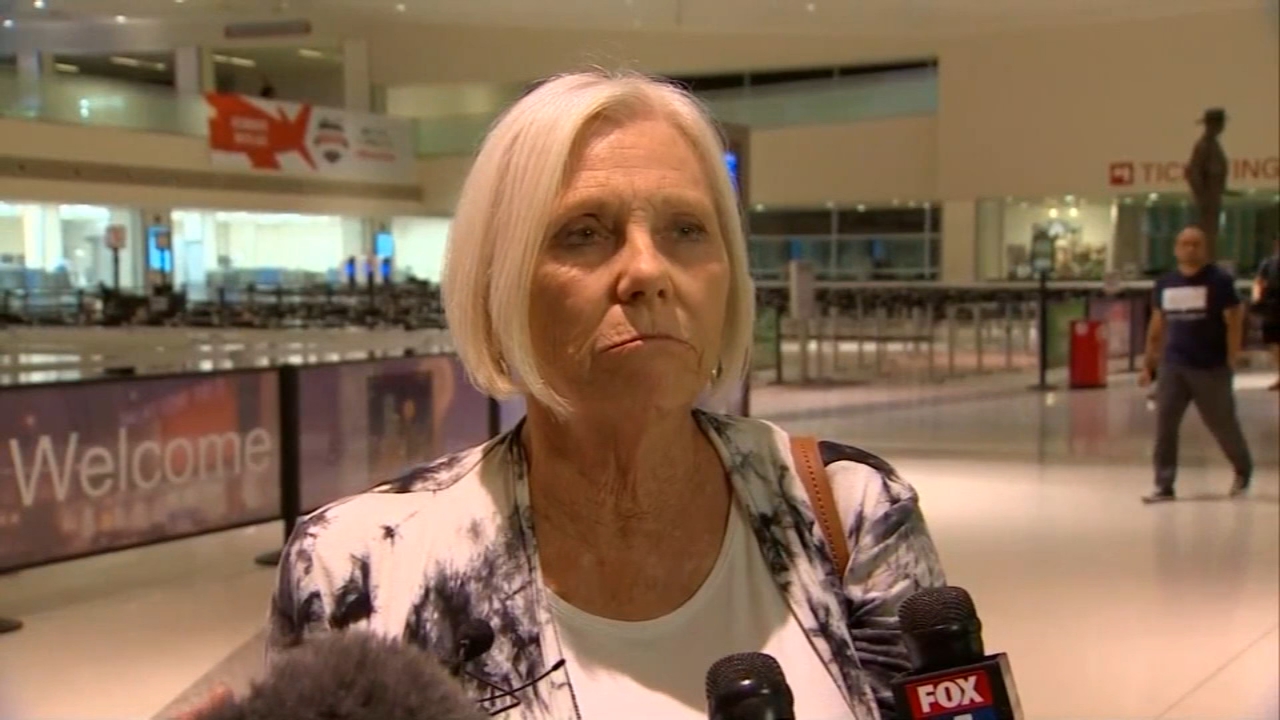 Retired nurse helped Southwest victim
A retired nurse who was on the ill-fated Southwest Airlines flight that made an emergency landing in Philadelphia Tuesday is describing the terrifying incident, and her efforts to help save the most seriously injured passenger.

The National Transportation Safety Board sent a team of investigators to Philadelphia.

In a late night news conference, NTSB chairman Robert Sumwalt said one of the engine's fan blades was separated and missing. The blade was separated at the point where it would come into the hub and there was evidence of metal fatigue, Sumwalt said.

Photos taken by passengers from inside the cabin and posted on social media showed what appeared to be significant damage to the jet, with part of the covering from its left engine ripped off and a window damaged.

The engine will be examined further to understand what caused the failure. An investigation could take 12 to 15 months. Photos of the plane on the tarmac showed a missing window and a chunk gone from the left engine, including part of its cover. Sumwalt said part of the engine covering was found in Bernville, Pennsylvania, about 70 miles west of Philadelphia.

Southwest said Tuesday night that as a precaution it would inspect similar engines in its fleet over the next 30 days.

Passengers commended one of the pilots, Tammie Jo Shults, for her cool-headed handling of the emergency. She walked through the aisle and talked with passengers to make sure they were OK after the plane touched down.

"She has nerves of steel. That lady, I applaud her," said Alfred Tumlinson, of Corpus Christi, Texas. "I'm going to send her a Christmas card, I'm going to tell you that, with a gift certificate for getting me on the ground. She was awesome."

Tracking data from FlightAware.com showed Flight 1380 was heading west over Pennsylvania at about 32,200 feet (10 km) and traveling 500 mph (800 kph) when it abruptly turned toward Philadelphia.

Amanda Bourman, a New York resident said she was asleep near the back when she heard a loud noise and oxygen masks dropped.

"Everybody was crying and upset," she said. "You had a few passengers that were very strong, and they kept yelling to people, you know, 'It's OK! We're going to do this!'"

Matt Tranchin was on his flight home from New York to his 8-month pregnant wife in Dallas when he saw an explosion ahead of him.

Bourman told the Associated Press said she saw emergency medical workers using a defibrillator to help a woman who was taken off the plane after it landed.
EMBED More News Videos

Passenger Marty Martinez did a brief Facebook Live posting with the caption "Something is wrong with our plane! It appears we are going down! Emergency landing!! Southwest flight from NYC to Dallas!!"

In a recording of conversations between the cockpit and air traffic controllers, an unidentified crew member reported that there was a hole in the plane and "someone went out."

Tumlinson said a man in a cowboy hat rushed forward a few rows "to grab that lady to pull her back in. She was out of the plane. He couldn't do it by himself, so another gentleman came over and helped to get her back in the plane, and they got her."

Another passenger, Eric Zilbert, an administrator with the California Education Department, said: "From her waist above, she was outside of the plane."

As the plane came in for a landing, everyone started yelling to brace for impact, then clapped after the aircraft touched down safely, Bourman said.

"We were very lucky to have such a skilled pilot and crew to see us through it," Zilbert said. "The plane was steady as a rock after it happened. I didn't have any fearing that it was out of control."

The last time a passenger died in an accident on a U.S. airliner was 2009 when 49 people on board and one on the ground were killed when a plane operated by Colgan Air for Continental Connection crashed on a house near Buffalo, New York.

Southwest has about 700 planes, all of them 737s, including more than 500 737-700s like the one in Tuesday's accident. It is the world's largest operator of the 737. The 737 is the best-selling jetliner in the world and has a good safety record.

Southwest CEO Gary Kelly said in Dallas that there were no problems with the plane or its engine when it was inspected Sunday.

The jet's CFM56-7B engines were made by CFM International, jointly owned by General Electric and Safran Aircraft Engines of France. CFM said in a statement that the CFM56-7B has had "an outstanding safety and reliability record" since its debut in 1997, powering more than 6,700 aircraft worldwide.

Last year, the engine maker and the Federal Aviation Administration instructed airlines to make ultrasonic inspections of the fan blades of engines like those on the Southwest jet. The FAA said the move was prompted by a report of a fan blade failing and hurling debris. A Southwest spokeswoman said the engine that failed Tuesday was not covered by that directive, but the airline announced it would speed up ultrasonic inspections of fan blades of its CFM56-series engines anyway.

"There's a ring around the engine that is meant to contain the engine pieces when this happens," said John Goglia, a former NTSB member. "In this case it didn't. That's going to be a big focal point for the NTSB - why didn't (the ring) do its job?"

Kristopher Johnson on board the flight and captured this photo of the engine upon landing at Philadelphia International Airport.

In 2016, a Southwest Boeing 737-700 blew an engine as it flew from New Orleans to Orlando, Florida, and shrapnel tore a 5-by-16-inch hole just above the wing. The plane landed safely. The NTSB said a fan blade had broken off, apparently because of metal fatigue. 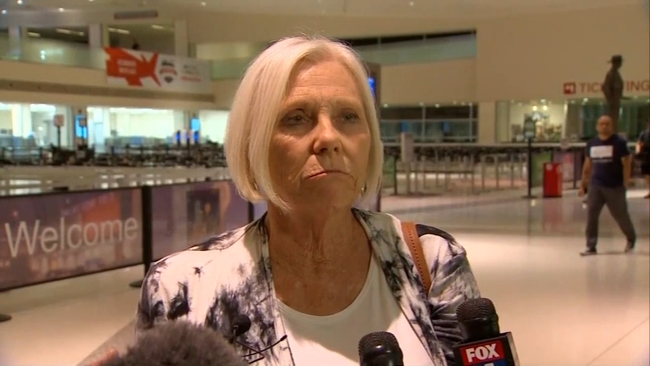 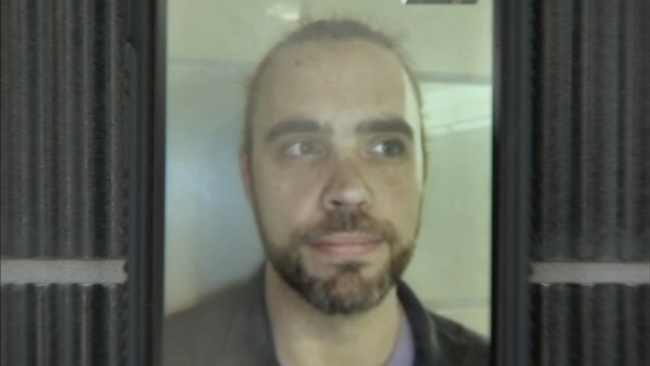