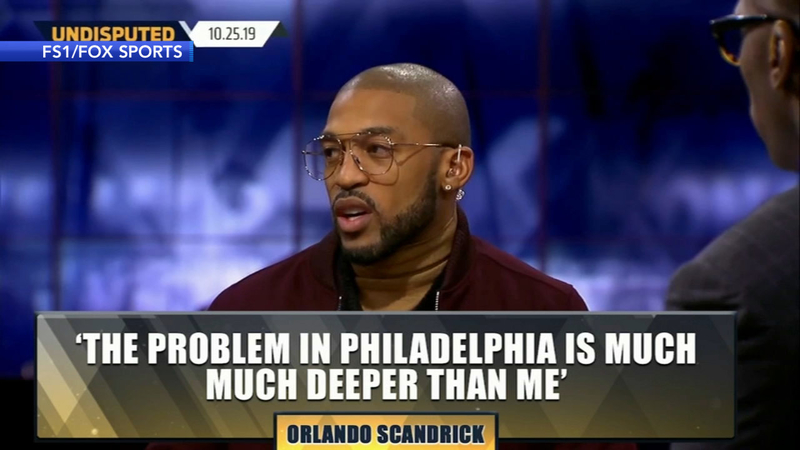 "Let's just say, where there's smoke, there's fire," Scandrick said on FS1 when asked about the rumblings of locker room turmoil. "That locker room is different. I'd tell guys when I came there that I felt like they were still living off that Super Bowl high. It's over. They're living in the past."

Scandrick, 32, was released by the Eagles on Monday after a blowout loss to the Dallas Cowboys. He said the move "felt kind of scapegoat-ish."

"The problem in Philadelphia is much, much bigger than me," Scandrick said.

His comments didn't go over well with Jenkins, who said there was a players-only meeting held this week for the first time in his six seasons with the Eagles.

"To know now that that's kind of what was in your locker room, it feels good to know that it's not here," Jenkins said Friday. "Anybody that we have in here, we want to make sure that we have each other's back. It's a family. This team is very, very close. If you look around, I think everybody in here can trust one another. We feel like we have what it takes."

When asked about the state of the defense, Scandrick said he felt "they've stuck together pretty good," before adding that he believes "there's some selfish people in that defense, though," and made it apparent he was referencing Jenkins.

"I think Rasul Douglas -- he's a good friend of mine -- I think he took some unwanted heat for some blown coverages on some other people's selfish play. And we don't even have to say names. They know who they are," said Scandrick, referencing the big plays the Eagles gave up to Minnesota Vikings receiver Stefon Diggs in a 38-20 loss the week before.

"You look at everything that happened. You hold out for a contract. You come in. You're not really making any plays, like splash plays. Then you go down to Minnesota and you're supposed to be in the half of the field and you end up playing a crosser? That's not a rookie we're talking about. It's a two-time Super Bowl champ."

Jenkins took accountability for the play Scandrick brought up immediately after the Vikings game.

"I really give two s---s about people who ain't here," Jenkins said Friday. "You ask anybody in the locker room who I am as a player, who I am to this team. I think one of the things he said is I didn't take accountability for certain plays. Anybody that goes and looks at any of my comments, I immediately take credit for all of the mistakes I make.

On Friday afternoon, the Eagles tweeted video from their Oct. 13 game against the Vikings in which Scandrick praised Jenkins after he forced a fumble.

"That's exactly why you the captain of this defense, bro," Scandrick is heard telling Jenkins on the sideline. "The way that you [expletive] conduct yourself. First snap to the last."

Scandrick appeared in three games for the Eagles. He was cut before the start of the season and was brought back prior to the Week 5 game against the Jets, where he had two sacks and returned a fumble for a touchdown.

"There are some accountability issues there," Scandrick said, "and it starts from the top."

Scandrick said Roseman told him when he was cut that the team wanted to go in a younger direction and that they were "a mess" on the defensive side of the ball.

"I don't believe anything Howie says," Scandrick said. "Howie is one of the people that if you told me it was raining outside, I'd probably get some shorts just in case. [The release was because] he wanted to play some younger players and they're a mess on defense and they needed to get some defensive linemen, so we'll see how that works out for them this weekend up in Buffalo."

The Eagles (3-4) are just one game behind the Dallas Cowboys in the NFC East entering Sunday's game against the Buffalo Bills.

"We're far from being out of anything," Jenkins said. "In fact, we were worse off probably last year. It's just, with all the expectations that came with this team and obviously all of the noise and all of the outside things, it's an opportunity for us to just hunker down, really just engage with the guys in this room, get the focus back on the guys in this room and what our roles are.