In the video, you can hear laughing from inside the truck after the two men are blasted with snow.
WPVI
By Trish Hartman 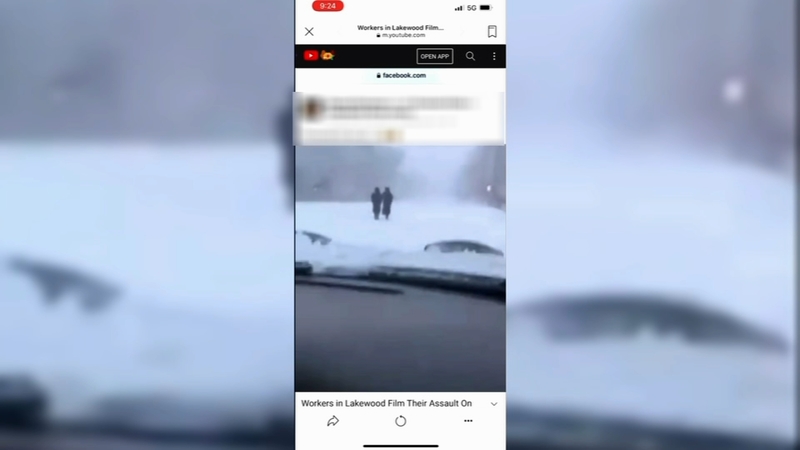 OCEAN COUNTY, New Jersey (WPVI) -- Authorities in New Jersey are investigating whether a weekend incident was a hate crime after a video posted on social media showed two people getting blasted with snow by a plow during the storm.

The video was recorded by someone inside the truck with a plow on the front as two men walked along County Line Road near the Lakewood/Jackson border.

Then, the plow is lowered and the two people are blasted with snow and ice.

In the video, you can hear laughing from inside the cab after it happens.

The victims appear to be wearing Orthodox dress, and the community has a large Orthodox Jewish population.

The video was posted on social media and was later taken down, but enough people saw it, including local authorities.

Lakewood Mayor Ray Coles said he was "disgusted" by what he saw in the video, and said it's likely the victims were walking to or from Shabbat services when this happened.

He added the victims were not injured.

One of the people in the truck listed their employer as Waste Management, a private company, that released a statement saying the man has been suspended.

Part of the statement reads: "We are aware of an incident that was posted by an off-duty WM employee to his personal social media account. The hateful conduct depicted in this video is unacceptable and does not reflect the values of inclusion and diversity we hold as a company."

The New York and New Jersey division of the Anti Defamation League tweeted, "We are absolutely disgusted by this video footage which appears to show a snow plow operator intentionally and callously targeting two Orthodox Jewish men. This conduct is as dangerous as it is disturbing and we urge the victims to file a report with the @Lakewood_PD."

Lakewood Shomrim, a volunteer-based safety patrol that covers Lakewood Township, said "The incident in question was extremely troubling, reckless and dangerous. As Mayor Ray Coles noted, it could easily have ended up creating a deadly situation," in a statement released Tuesday afternoon.

"We would also like to thank Waste Management for reaching out to the community and affirming their strong position in standing against antisemitism," the statement from Shomrim continued.