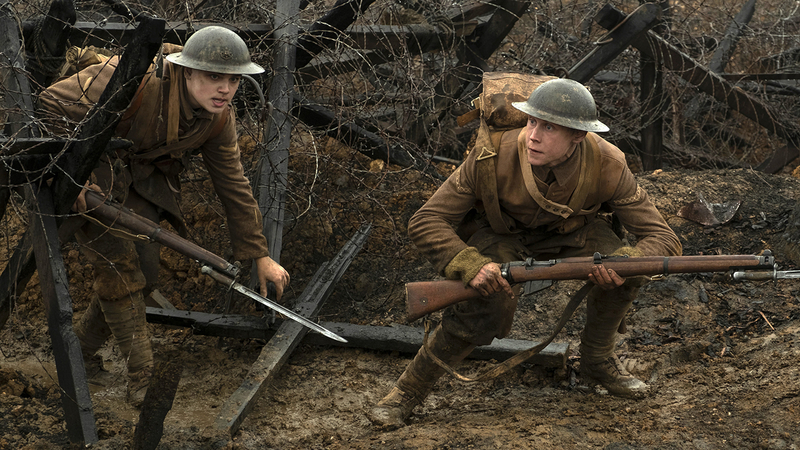 SAN FRANCISCO, Calif. -- 1917 is not your typical action movie. There are explosions, gun battles, and chases.

The movie is in constant motion as it tells the journey of two British soldiers in a race against time to save 1,600 lives. Director Sam Mendes wanted to immerse the audience in that journey.

"I wanted the audience to feel every second passing. Feel how far they had to go. Experience every step with them," said Mendes during a stop in San Francisco shortly before the movie's premiere in December.

To achieve that immersive storytelling, Mendes, who won an Academy Award for American Beauty, came up with the idea of telling the story in real time.

#1917Movie has been nominated for 10 Academy Awards including Best Picture. #OscarNoms pic.twitter.com/AJS7vm62Ji

The story is set in France during World War I. It begins with two soldiers being given an assignment and continues non-stop as they try to carry out their orders.

To simulate a continuous journey, the camera was hoisted on special rigs, cars and drones as it followed the actors through trenches, barracks and rivers. The task of capturing the action was given to cinematographer Roger Deakins, who worked on The Shawshank Redemption, Fargo, A Beautiful Mind and Blade Runner 2049, for which he won an Oscar.

"60% of the film is on a remote head that is called a stabilizer. It operated from hundreds of yards away. You couldn't have done it on film because of the weight of the camera," said Deakins.

"To be able to play these scenes out... you really get lost in it. It never felt like a set. They created trenches, barns and it really got you wrapped up in that world," said Dean-Charles Chapman, who played Lance Corporal Tom Blake, a soldier on a mission to save his brother. His partner in this journey was Lance Corporal Will Schofield, played by George MacKay. Both dedicated a lot of rehearsal time for the movie.

"It was a different process of working. We were there months beforehand to basically choreograph the film. Being involved from early on was brilliant," said MacKay.

Screenwriter Krsyty Wilson-Cairns worked with Mendes to create that world.

"I did huge amount of research on first hand accounts. And so I read the diary of men who fought in the war. I went to France and drove all over the region. There is a mile of roads and there is five cemeteries for every mile. And I was older than every boy buried there," recalled Wilson-Cairns of the writing process.

For the main actors, it felt like a stage play. A stage that spread out over several miles of countryside.

"With stage, you have to choreograph the whole thing. It's essentially one shot. The play could last three hours and you can't mess up. And neither could you on this. We were doing up to eight-minute takes sometimes. And you don't want to be the one to ruin a take but it happened. You have to carry on as best as you could," said Chapman.

1917 has already won best motion picture and best director at the Golden Globes and is up for 10 Academy Awards, including best movie, director, cinematography and screenplay.