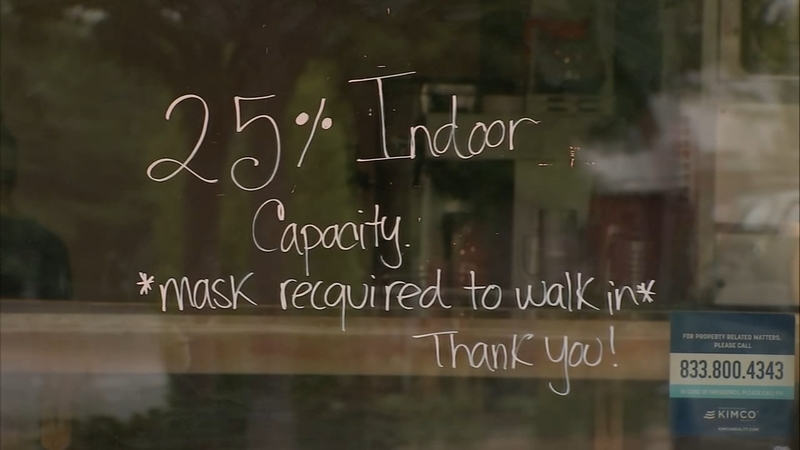 WAYNE, Pennsylvania (WPVI) -- The latest surge in COVID-19 cases and the shortage of customers willing to eat indoors is making it tough for restaurants to stay in business.

One couple says they are doing everything they can to keep from shutting down.

The owners of the Lumbrada Restaurant in Wayne, Pennsylvania had a hard time believing the old adage, "You're one paycheck away from being homeless."

"Got to the point where if we didn't get the PPP program, the assistance, we were gonna shut down and throw in the towel," said Anselmo Torres.

One by one, they saw restaurants all around them shut down.

The National Restaurant Association says since the beginning of July, nearly 100,000 dining rooms have been forced to close again by state or local mandates across the U.S.

In Pennsylvania, Governor Tom Wolf has rolled back restrictions on indoor dining from 50% to 25% capacity. In Philadelphia, indoor dining is still shut down.

"That does hurt us, especially in the hot summer days. Even if you have a large sitting capacity outside, nobody wants to sit outside, too hot," said Torres.

By chance, the couple decided to invest in a food truck right before the pandemic that they drive around selling tacos and burritos.

"And really that's what saved us. Thank god," said Torres.

Before the pandemic, they had almost 30 employees. Now, they're down to two servers and two cooks. The rest of their staff is either too scared to catch the virus, have no one to watch their child or they're getting financial assistance from the government.

"They're making more money at home, staying home than coming to work," he said.

Ordinarily, Anselmo's wife, Marlen, would be at home with the kids. But these are far from ordinary times.