The students are demanding that the school suspend Amy Wax while investigating her employment and conduct.
ABCNews 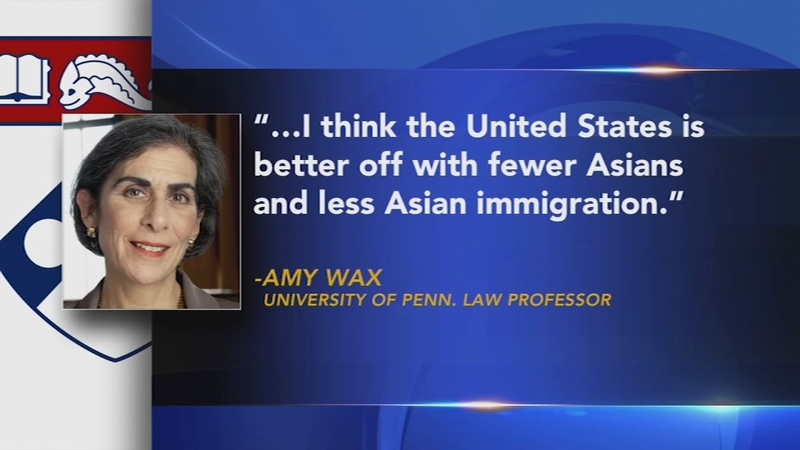 PHILADELPHIA -- Students at the University of Pennsylvania Carey Law School are calling for the suspension of a law professor who they say has repeatedly expressed racist beliefs about Black and Asian populations.

"As descendants of enslaved ancestors, immigrants, refugees, asylum seekers and persons holding multiple identities among these, we reject Amy Wax's hateful rhetoric that we in our communities are dangerous, inferior, do not belong have made fewer contributions and are inherently less able to utilize a law because of our skin colors or heritage," their statement read.

On Fox News' "Tucker Carlson Today" earlier this month, Wax spoke about her views against people criticizing racism in America.

Later in the show, Wax disparaged Indian Americans who criticize the United States: "They climb the ladder, they get the best education, we give them every opportunity, and they turn around and lead the charge on 'we're racist, we're an awful country'...On some level, their country is a s--thole."

"Few understand how much more burdensome law school is for students who continuously receive the message that they are 'less than' or do not belong," the joint letter read. "Penn Law must do more to protect these law students and reject Wax's odious rhetoric."

The students are demanding that the school suspend Wax while investigating her employment and conduct in accordance with behavioral conduct and grading policies.

They're also demanding that the school provides transparency into its tenure requirements and behavioral conduct proceedings, as well as provide alternative professors to teach Wax's courses.

Wax declined ABC News' request for comment on the calls for suspension and the criticism.

SEE ALSO: Calls continue for action against Penn professor who made anti-Asian comments

Wax has made numerous controversial comments in the past.

In a 2017 lecture, she said "I don't think I've ever seen a Black student graduate in the top quarter of (a Penn Law) class and rarely, rarely in the top half," which the school's dean debunked, according to the joint letter.

The university at the time barred Wax from teaching required courses and assigned her to elective courses only, the letter said.

In 2019, Wax said the U.S. would be "better off with more whites and fewer non-whites" at a conference in Washington, D.C., according to a statement from Theodore Ruger, the dean of the law school, denouncing the comments.

"I write now to emphasize how fundamentally the substantive views attributed to Professor Wax contravene our institutional values and policies," Ruger said.

He said, "At best, the reported remarks espouse a bigoted theory of white cultural and ethnic supremacy; at worst, they are racist. Under any framing, such views are repugnant to the core values and institutional practices of both Penn Law and the University of Pennsylvania."

In December 2021, on Brown University professor Glenn Loury's "The Glenn Show," Wax said, "as long as most Asians support Democrats and help to advance their positions, I think the United States is better off with fewer Asians and less Asian immigration."

In a statement to ABC News, the University of Pennsylvania Carey Law School said it has "made clear that Professor Wax's views do not reflect our values or practices."

"At this time, as required by the University Handbook, and to preserve the integrity of the process, we will not make any public statements until the proceedings have been completed," the university stated.

Students have long been calling for consequences against Wax, and have expressed disappointment in the university's inaction in the past.