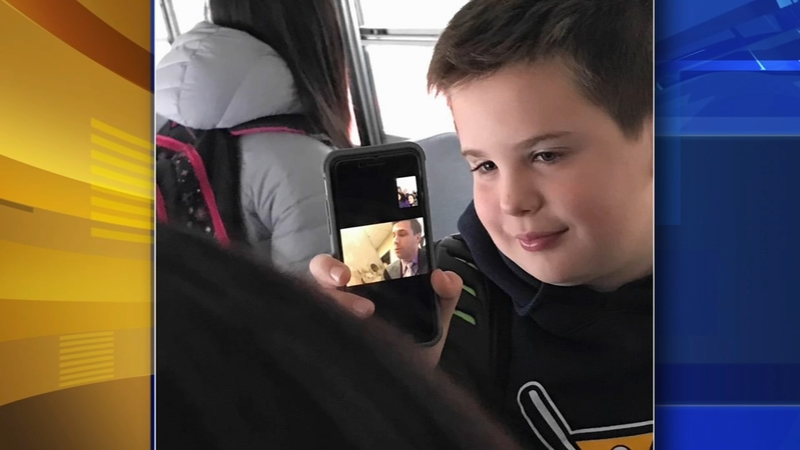 HUNTINGDON VALLEY, Pa. (WPVI) -- The ride home was not easy for a lot of people Thursday afternoon. Whether you were trying to make your way home from work or school, the snow, sleet, and rain made for slick roads and traffic jams galore.

The students of Pine Road Elementary in the Lower Moreland School District were among those stuck with nowhere to go.

"When we got about halfway. We got stuck because their cars crashed," said 5th grader Gavin Blumhardt.

Dr. Brian Swank, the principal of the K-5 school, was keeping watch to make sure all the children on their school buses safely got home.

"Some of our buses made it home in decent time given the circumstances, but we had five or six buses that really just couldn't get through the traffic gridlock," Swank said.

Pine Road Elementary School principal Dr. Swank reads to students stuck on the school via FaceTime during the November 15, 2018 storm.

The school was receiving call after call from concerned parents looking for an update.

Swank said Gavin's mom called in to say her son called her and said the kids on the bus were very nervous about the situation.

So Swank decided to give Gavin a call to check in.

"He said, 'Dr. Swank, everyone is freaking out, especially the young kids.' So I decided to switch over to FaceTime," Swank said.

Now, Swank could see the faces of the students, and they could see his.

"I was hopeful that a familiar face would have a calming influence on them," Swank said.

Swank said the kids were surprised to see him at first, but the older students helped them settle in. He then put his plan in action to keep the students, who were huddled on the bus stuck in the middle of an early winter storm, reassured.

"The 5th grade student helped me get the kids organized and situated and we passed a little time by reading some books," Swank said.

I just FaceTimed with our students that are still stuck on buses. They are warm and in good spirits. I read them some books and assured them that the grown-ups are working hard to get them home safely.
—Dr. Swank pic.twitter.com/3ppc5cL0PF

Swank said the bus was totally silent as they listened to the stories.

"I'll never stop being a teacher. Every good teacher knows that there is nothing better than a good read-aloud. Kids of all ages love being read to," Swank said.

The principal read two books to the students. The first - 'You Belong Here' by M.H. Clark.

"I know that sounds a little crazy given the circumstances. But really it's a message about being together and belonging to something important. In this case it was being a part of our Pine Road family...even if they were stuck on buses! Everyone worked together like good families," Swank said.

The second book was 'Oh! What a Surprise!'

"Because, well, we didn't see this happening in November!" Swank joked.

At the end of the day, everyone got home safely. And that, Swank said, is the only thing that matters.

Swank said the bus drivers and transportation team deserve the credit for taking care of the kids.

"Kudos to our drivers and transportation team for their efforts. They were the unsung heroes of the day! They were incredible," Swank said.