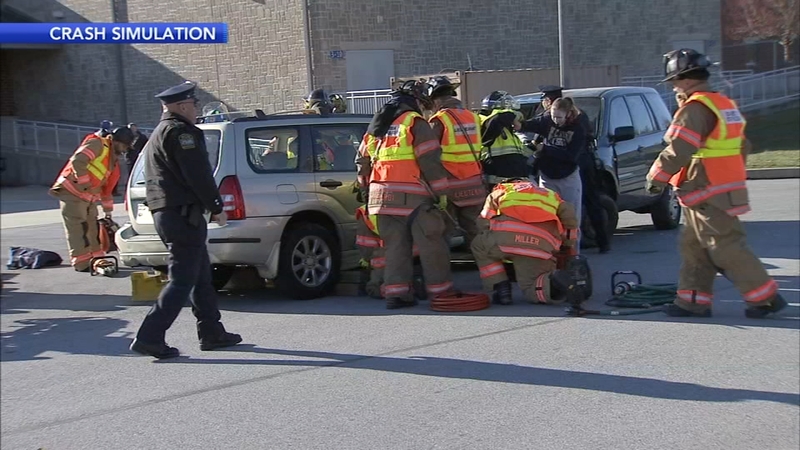 WEST CHESTER. Pa. (WPVI) -- Students at a Chester County high school witnessed a crash simulation ahead of their prom this weekend. The hope is to illustrate the dangers of drunk driving in an impactful way.

The images were intense and the emotions high in the reenactment at Bayard Rustin High School in Westtown Township, as students stumbled out of vehicles and fictitious parents rushed to the "scene."

Fellow junior Christopher Palmer added, "When you actually see what would happen in that situation, it lets you know how realistic it is and how much your decisions matter."

Students watched the crash simulation from the nearby hill. The scene opened on an accident between two vehicles. One student in the reenactment was killed on impact.

The actors were students, other than three professional actors who played the parents rushing to the scene.

The first responders, however, are real. It's a coordinated effort among local agencies that hope this mock crash drives home the consequences of drunk driving.

Sergeant Ted Lewis of Westtown-East Goshen Regional Police explained, "It makes a big impact, and for some it can even be on the traumatic side so it's something I think makes a lasting impression."

Classmates emerged from cars limping. The reenactment depicted another passenger who was trapped. He was freed by firefighters but died at the scene.

Junior Bridget Duffy played the role of the drunk driver who failed field sobriety tests and was arrested.

She told Action News, "I know people that were saying that they wouldn't believe it if it were me. But it shows it can happen to anyone."

Charles Gaza, who is the chief of staff at the Chester County District Attorney's Office, has prosecuted these types of crashes.