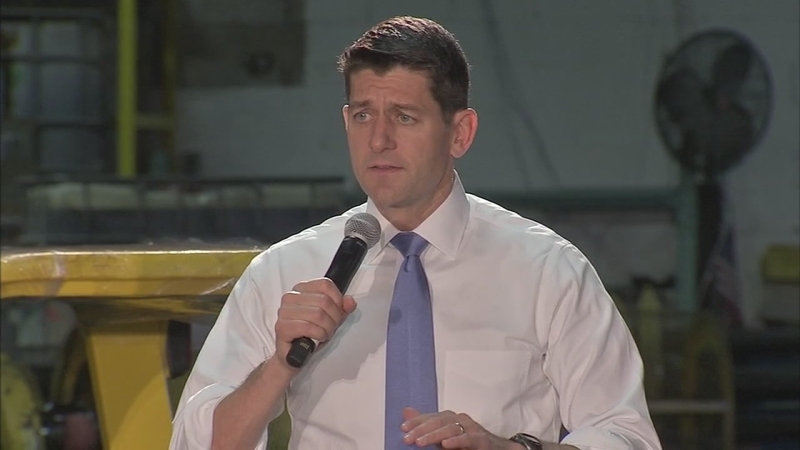 ASTON, Pa. (WPVI) -- House Speaker Paul Ryan is confronting a career-defining challenge as he tries to sell a GOP tax overhaul that Republicans are counting on to keep them in control of Congress. Many Republicans fear that failure on taxes, coming on the heels of failure on health care, could mean a harsh punishment in next year's midterm elections.

With that political reality as the backdrop, Ryan traveled outside the Beltway on Thursday to pitch the GOP's ambitious plan at a pipe-fitting plant in Pennsylvania, home to several House districts Democrats hope to contest next year. Addressing dozens of workers, the Wisconsin Republican argued that American companies will be able to compete better in a global economy if corporate rates are slashed from 35 percent to 20 percent as envisioned in the plan he helped author with Senate GOP leaders and the Trump administration.

"If they can compete, they can get more jobs, they can get more accounts and they can raise wages," Ryan told workers crowded in front of a makeshift stage on a factory floor, surrounded by robotic milling machines. "Wouldn't you like to see that happen? That's the whole idea here."

Pressed by one worker on how he could ensure that the corporate rate cut would benefit blue-collar workers, rather than CEOs, Ryan said CEOs are "already getting paid well" and returned to his argument that high corporate rates hurt workers. The GOP tax plan, though, does plenty to benefit the wealthiest Americans, including by eliminating the estate tax.

For Ryan, taxation is more than just another policy issue. It's one that's animated his political career, leading him to chair the Ways and Means Committee so he could have a hand in tax policy, the spot from which he was recruited to become speaker two years ago when his predecessor, John Boehner of Ohio, resigned under pressure from conservatives.

And now, with Republicans nine months into full control of Washington under President Donald Trump without notching a single major legislative achievement, tax reform has become the issue it's all riding on. In the days since the GOP "Obamacare" repeal plan died a final death in the Senate earlier this week, Republicans have again and again voiced the fear that if they don't succeed in overhauling the loophole-ridden tax code and send voters a tax cut, they will have nothing to run on in the 2018 midterms and will be cast back into minority status in the House.

That would cost Ryan his job as speaker and what he himself has described as a once-in-a-lifetime opportunity to influence policy on taxes and other issues.

"Our fortunes are tied together in this, we all have to get tax reform done," said GOP Rep. Thomas Massie of Kentucky. "If it's not done a lot of us are still going to be congressmen, but it's going to be hard for him to still be speaker. Not only might we lose our majority, it's questionable whether we deserve a majority if we don't get this done."

But even with many of the details of the tax plan remaining to be filled in, the challenges ahead already loom large. Democrats are denouncing the plan as a tax cut for the rich and attacking Republicans for leaving them out of negotiations on legislation the GOP intends to try to pass without Democratic votes.

More worrisome for Ryan, fellow Republicans from New York and New Jersey, in particular, started defecting with the plan barely 24 hours old Thursday because it eliminates deductions for state and local taxes that are important to voters in those high-tax states.

"I couldn't vote for it if it stays the way it is," said Rep. Pete King of New York, adding he'd voiced his concerns and GOP leaders asked him to keep an open mind and suggested they could work around the issue, though without saying how.

"I don't know how they'd do it," King said. "That means the rest of the country is getting a tax cut and all I can say to my constituents is it could have been worse."

Ryan has carved a reputation as a policy wonk since coming to Congress almost 20 years ago, crafting ambitious budget, Medicare and tax outlines that form the basis for much of the party's domestic agenda. But Republicans have been skittish about actually trying to pass hugely difficult agenda items such as big spending cuts and overhauling Medicare. A Ryan-backed plan to cut Medicaid died with the failure of health legislation this year.

And on taxes, Ryan has been vague so far about some of the fine print. Asked by reporters at the Capitol on Thursday how he was going to stick with promises to keep the multitrillion-dollar tax plan from adding to the nation's ballooning deficit over the long term, he replied only: "You'll see."

There's been speculation all along that if Republicans run into trouble getting their sweeping overhaul through, they'll back off and settle for a narrower package of cuts.

Still, fellow Republicans says Ryan's enthusiasm for getting tax reform legislation passed into law has been unmistakable, and some see signs of hope in that. Days after the plan's release, the speaker was promoting it in multiple television interviews.

Describing a tax event Ryan held with fellow GOP lawmakers this week, Rep. Daniel Webster of Florida said: "He was just totally giddy about the possibility of making this happen."