Cats named after 'The Lion King' characters may have been poisoned: Officials 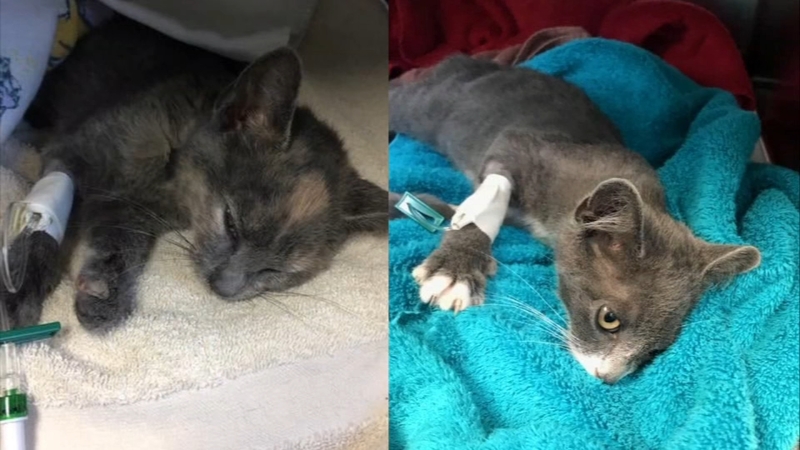 UPPER DARBY, Pennsylvania (WPVI) -- Signs have been posted around Maple Avenue in Upper Darby, Delaware County warning neighbors about cats that may have been poisoned.

The cats were taken to Providence Animal Center where they were given names from characters of the Disney film "The Lion King."

Simba was found on Maple Avenue on Thursday fighting for his life after he was found possibly poisoned.

Providence Animal Center posted a video to their Facebook page after someone in the area found him.

A couple of hours later, another cat was brought in. She was given the name Nala and was found with similar symptoms.

Simba and Nala were rushed to the emergency hospital, but both died. Testing will be conducted to see what kind of poison may have killed them.

"Who would poison kittens? There's no reason for it not at all," said Upper Darby resident Fatima Abdul-Hakeem.

Two more cats were brought in Friday, given the names Rafiki and Mufasa. They were found in the same area on Maple Avenue, and they're both in critical condition.

The animal center said it's suspicious that all these cats appear to have been poisoned, but It's unclear if it was intentional at this point.

"It's suspicious and it does seem that there's some type of toxicity," said Dayna Villa, Director of Operations at Providence Animal Center.

There is a park across the street from where the cats were found and neighbors said they are worried about their children's well-being.
"I have a daughter, and I bring her to the park, and if she's exposed and hurt by that, then that's horrible. I couldn't even believe someone would leave something out to hurt animals," said Abdul-Hakeem.

The animal center doesn't know if the cats are feral or pets, but some neighbors said there are a lot of stray cats in the area that are a nuisance.