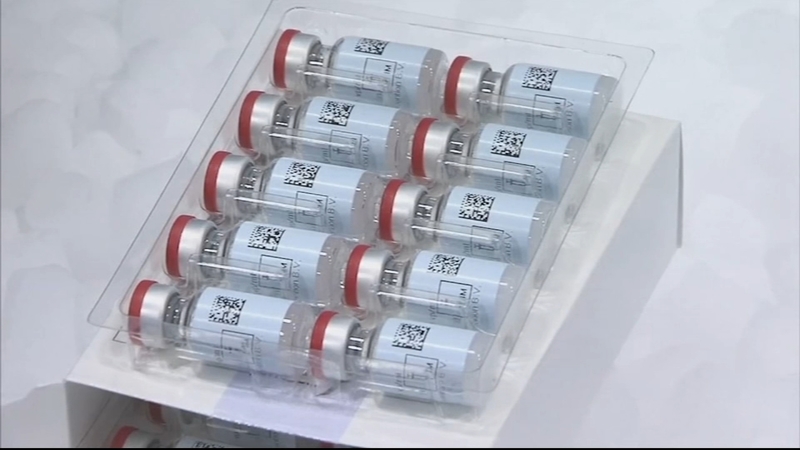 MIDDLETOWN, Pennsylvania (WPVI) -- Four counties in the suburbs of Philadelphia expressed their disappointment with the Pennsylvania Department of Health regarding plans to open a regional site to distribute the Johnson & Johnson COVID-19 vaccine.

The state wants leaders to pick a site for the clinic. Officials in Bucks, Chester, Delaware and Montgomery counties said a regional clinic would compromise equitable vaccine distribution.

"Instead of working with local elected officials and county Health Departments closest to the people we serve, the State has chosen to take the advice of a Boston logistics company to establish regional sites as our local mass vaccination sites sit underutilized. We have highly qualified public health and safety teams in place, high-volume locations secured, and more than 500,000 people waiting on our collective lists to get their shots. We just need more supply," read a portion of the statement.

The four southeastern Pennsylvania counties want the state to allocate its surplus supply of the one-shot Johnson & Johnson vaccine to counties directly.

For weeks, leaders from southeastern Pennsylvania counties have called out the state saying that based on the size of their population, they have not received the proper allotment.

After outrage over the COVID-19 vaccine supply shortage in Philadelphia's suburbs, some officials are reporting progress is being made.

The state previously called these "false accusations" and blamed the data saying it wasn't accurate since some factors were not considered.

State Representative Frank Farry, a Republican who represents parts of Bucks County, is one of the vocal lawmakers who disagrees with the state's one-site plan.

He even introduced a bill that would require the state to distribute the vaccine based on population size.

"Our counties already have the infrastructure set up. They already have regional sites already staffed. They have a portal people signed up on. Now, I presume, you're going to have people sign up on another portal?" said Farry in his Middletown Township District office.

During a press briefing Thursday, Acting Secretary Alison Beam said the counties would also have their own sites.

Beam applauded the providers, including healthcare systems and retail pharmacies with also administering the vaccine as part of a federal program where the vaccine is shipped directly to them and logged by the state.

According to a press release from the State Department of Health:

"An analysis of CDC data on the number of vaccines administered per 100,000 of the population over the past week (through March 17), puts Pennsylvania second in the nation behind only New Mexico. More than 3.9 million doses of vaccine were administered across the state; more vaccine administered than 44 other states. More than 1.3 million people (are) fully vaccinated."

Late Thursday, a state task force that was created to handle vaccine distribution met. Sources say the governor's office may offer a compromise that would include at least one additional mass vaccination site for southeastern Pennsylvania.

All of the state sites will be run by PEMA and the National Guard.

We are extremely disappointed to hear that PA DoH is not considering our request to allocate the Johnson and Johnson vaccine directly to Bucks, Chester, Delaware, and Montgomery counties. We have reiterated our concerns about establishing a regional PEMA site for many reasons, and we remain deeply concerned that equitable distribution will be compromised at such a site.

"Instead of working with local elected officials and county Health Departments closest to the people we serve, the State has chosen to take the advice of a Boston logistics company to establish regional sites as our local mass vaccination sites sit underutilized. We have highly qualified public health and safety teams in place, high-volume locations secured, and more than 500,000 people waiting on our collective lists to get their shots. We just need more supply.

"Opening a separate state-run vaccination location raises many important questions that our residents deserve to know the answers to, such as will they have to pre-register on yet another list to receive the vaccine at these new regional vaccine sites or if their current places in line will be kept. We also have questions on how will the state ensure equitable access for these regional sites including options for telephone registration and language access. These questions remain to be answered. The last thing we want is to see our constituents have to sign up for yet another list when they have already been waiting for weeks.

"We also remain concerned that without an allocation of single shot Johnson and Johnson vaccines our efforts to efficiently vaccinate our most vulnerable residents will be hampered. This includes residents experiencing homelessness, homebound individuals, and people within our correctional facilities.

"For all these reasons, we implore Pennsylvania DoH to allocate its surplus supply of the one shot Johnson and Johnson vaccine to counties directly.