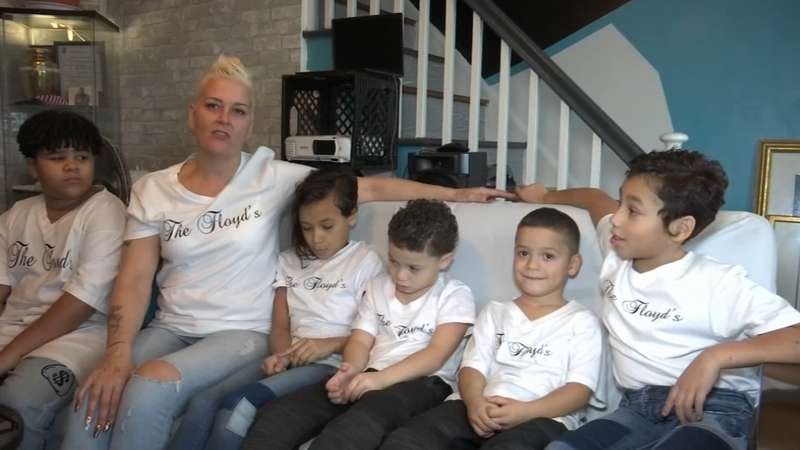 PHILADELPHIA (WPVI) -- A family from the Juniata section of Philadelphia is celebrating a big day. The Floyds officially adopted four siblings after fostering them for some time.

It's rare to find a silent moment in the Floyd home. The family wouldn't have it any other way.

"We all, we're all together now!" said 10-year-old Serenity Floyd, looking at a couch with three of her biological siblings.

Being together hasn't always been realistic for the family. In fact, this is the first day they've all shared the same last name.

"I didn't want to keep going to the system and travel to different homes, so I asked her, 'Can I be adopted?" said Serenity.

That's where Bobbie Floyd came in.

"When I realized that they were going to be separated, I knew that I had the space and the patience to take them all in," said Bobbie.

She started out as a foster mom for two of the kids, then they kept coming.

She also has two biological kids of her own. She says she thought about more kids, then tragedy struck her family.

Bobbie says after the husband passed away, her house got a little too quiet for her liking. Two years to the day after that, she got a sign.

"It's amazing that my husband has been gone since 2014 and he's still blessing me with Floyds," she said.
Report a correction or typo
Related topics:
family & parentingphiladelphiafamilyadoption
Copyright © 2021 WPVI-TV. All Rights Reserved.
TOP STORIES
Frontier Airlines: 'We are supporting' crew who restrained passenger
New details revealed in crash that killed 4 family members
"Hands are tied" dealing with teens at NJ shore, police captain says
450,000 bees found inside walls of Montco home
Simone Biles reveals aunt died suddenly 2 days before competition
Man dies after shooting in parking lot of gentlemen's club
Governors in NJ, Pa. call on Cuomo to resign: 'We are appalled'
Show More
Not all of MLK Drive reopening to traffic; closures remain for years
School board: Teachers, staff must be vaccinated or get tested weekly
AccuWeather: Some sun inland today, showers at the shore
2 injured in Conshohocken incident
Obama scales back 60th birthday celebration due to COVID concerns
More TOP STORIES News