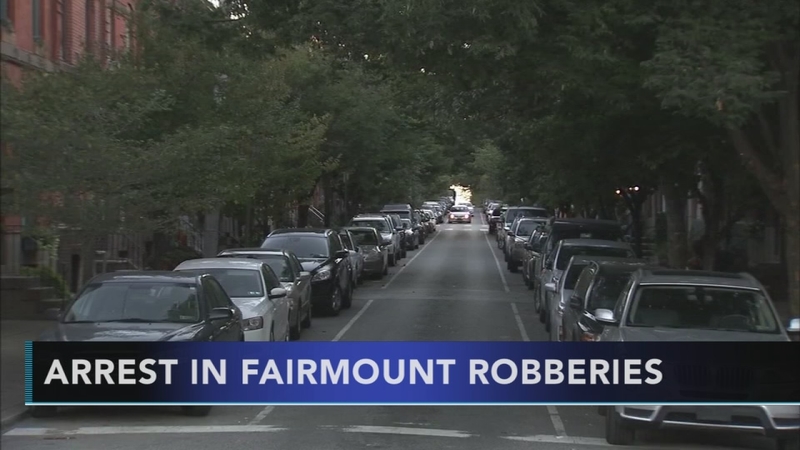 FAIRMOUNT (WPVI) -- Philadelphia police say the alleged suspect responsible for the recent rash of armed robberies in Fairmount has been arrested.

Ir started around 8:40 p.m. Friday when police say a man, wearing a black hooded sweatshirt with his face covered, grabbed a woman from behind as she exited her car at gunpoint.

The suspect took the victims bag and other items and fled the scene, police say.

Officers on patrol near 22nd and Brown noticed the suspect who matched the description of the robbery, and took him into custody.

Police say the male is the prime suspect in four armed robberies dating back to October 15.

The description in each armed robbery is the same and so is the way the assailant approaches his victims.

The first robbery occurred around 8 p.m. Sunday in the 2200 block of Brown Street.

Then Tuesday, just after midnight, a gunman mugged someone on the 800 block of N. 25th Street and struck again minutes later a few blocks away on N. 27th street.

"It's traumatic," said Merill Mason, who lives in the neighborhood. "I keep looking to see if someone is hiding behind cars or coming up quickly behind me."

Mason was attacked at 21st and Brown streets on March 14. News of these recent crimes is giving her flashbacks.

"He had come up behind me, cracked my head and dislocated my jaw," she said.

Her assailant took off with her purse and was never caught.

On Wednesday, while Frank Mannino and his daughter handed out flyers for their missing cat, they, like other neighbors, began to hear about the recent robberies on social media.

"I can deal with petty theft here and there, but armed robbery is not welcomed at all," said Mannino.

Anyone with information regarding these incidents is asked to contact police.