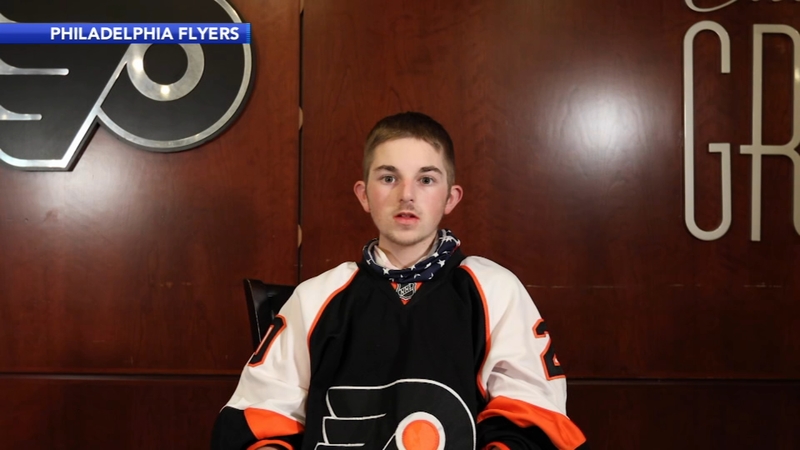 Lindblom was diagnosed with Ewing's sarcoma, a rare form of bone cancer, in December 2019.

He stayed in Philadelphia to receive chemotherapy at the Hospital of the University of Pennsylvania. In July 2020, Lindblom rang the bell at the Abramson Cancer Center at Pennsylvania Hospital signifying he completed his radiation treatments.

In September, he rejoined the Flyers during the playoffs. He hadn't played a game in 271 days.

Lindblom played 17:30 in the 5-4 double-overtime win over the Islanders to help Philadelphia force a Game 7.

In December, he announced he was cancer-free.

The Flyers signed Lindblom to a three-year, $9 million extension just weeks after he finished his chemo treatments.

During the pregame skate, Lindblom took an honorary lap around the rink by himself, something that usually is reserved for rookies making their debuts.

His Flyers teammates all donned Lindblom's No. 23 during warmups.

"Obviously, a special night. I think that's part of the reason we had so much jump tonight," Flyers defenseman Travis Sanheim said after the game. "What he's gone through, I think it was nice for him. I think he did the solo lap before, so it made it even cooler with what he's been through. It just goes to show the support that we have for him and I think that he took it away."

"A lot of emotions. To be able to play this game again, play in the NHL, it's the best league in the world, and still manage to be out there and compete, so it's a great feeling. I'm just happy to be able to play here and play again," Lindblom said. "It was emotional to be honest. I didn't expect to react like that when I skated on the ice. Just a lot of emotion and try to take it all in and focus on the game, but it was tough. It's been a tough year, or more than a year. Like I said, to be able to be out with this team, it's amazing."

"To be able to be out there with this team is amazing."

It's been a tough year but @oskarlindblom is enjoying being back with the boys full-time. #HockeyFightsCancer | @Toyota pic.twitter.com/7G3wJrjBc8

The specialty jerseys will be auctioned off by MeiGray to support local cancer organizations.

Seventeen-year-old Tony Campisi served as the team's "Honorary Coach" of the game Sunday night. The teen hockey player is battling cancer for the second time.

Tony read off the starting lineup via Zoom.

The 17-year-old was first celebrated by the Flyers in 2015 during his previous battle with the disease. As part of his Make-A-Wish, Tony was signed to a one-day contract with the Flyers, participated in the team's official practice and joined winger Jakub Voracek for a night of friendly competition at Dave & Buster's.

11-year-old Tony Campisi suits up to take the ice with @jachobe as part of his @NHLFlyers @MakeAWish today. pic.twitter.com/xtC3PopTIj

The Flyers also honored Steve Footit and family as the Frontline Family of the night.

Steve became a nurse in 2016 assisting patients in the ICU at Our Lady of Lourdes Hospital. Two years ago, He was diagnosed with Stage 3 Laryngeal Cancer.

Steve continued to assist others, as a nurse in the ICU while undergoing radiation and chemotherapy.

During the pandemic, Steve took on additional work and is currently caring for patients part-time in the ICU at St. Mary's Medical Center as well as Cape Regional.

"We are happy to have Steve with us in person and to also announce that Steve is in remission from his cancer!" the Flyers said.

The Flyers Frontline Families powered by @BELFORGroup welcome Steve Footit to #NYIvsPHI!
After a 27-year career in the @USArmy, Steve become a nurse in 2016 assisting patients in the ICU at Our Lady of Lourdes Hospital. #HockeyFightsCancer pic.twitter.com/fm5VfWMHVG

The Flyers' warmup stickers were outfitted with lavender Hockey Fights Cancer tape. They will also be auctioned off by Flyers Charities.

The Flyers lost to the New York Islanders 1-0 in overtime.