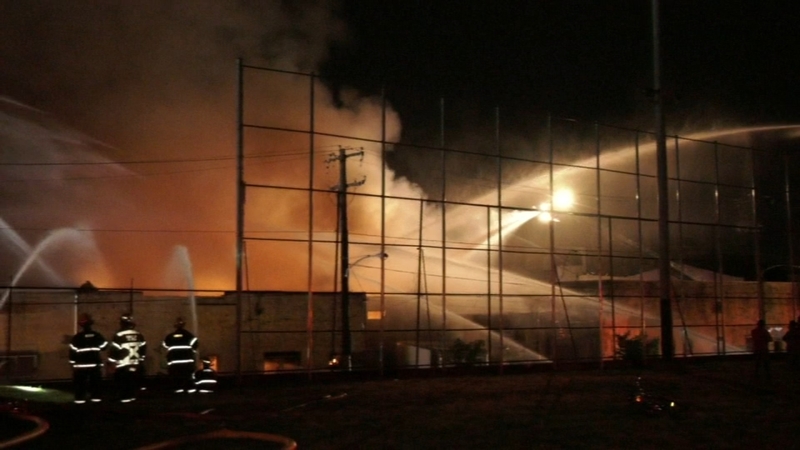 PHILADELPHIA (WPVI) -- Firefighters were still on scene Sunday morning, dousing hot spots from a four-alarm fire at a garage on Adams Avenue and Church Street in Frankford that raged for hours Saturday night, destroying the building which housed several tenants including an auto body shop.

According to Deputy Fire Commissioner Craig Murphy, the fire began at 9:15 p.m. and quickly spread throughout the building.

By 11:15 p.m., the fire was contained but not under control. One hundred seventy firefighters were on scene battling the blaze from the ground and from ladders above.

Murphy said crews did not attack the fire from the interior since they weren't sure if any hazardous chemicals or materials were inside the building.

When his mechanic who was closing the shop for the day saw the fire, he tried to put it out with a fire extinguisher which only spread the flames.

Firefighters battle multi-alarm garage blaze in Frankford. Video from the scene on June 8, 2019.

Harris said the building owner recently had electrical work done and he questions whether that may have been the cause.

He said his mechanic was able to escape the fire but his dog likely died inside.

The Philadelphia Fire Marshal was on the scene investigating to determine the exact cause.

Roads were closed for several blocks around the scene of the fire late Saturday.

So far, there are no reports of any other injuries.