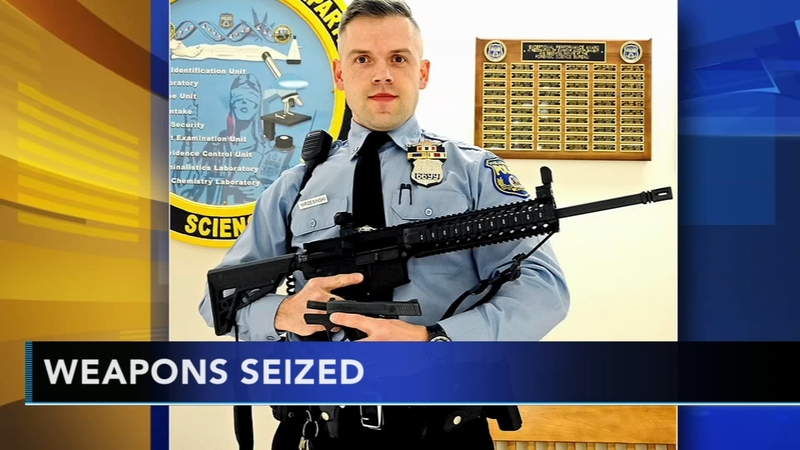 BRIDESBURG (WPVI) -- Philadelphia police arrested a 12-year-old boy and an 19-year-old man for walking the street with loaded weapons.

15th District Officer Wrzesinski made the arrests around 6:30 p.m.in the city's Bridesburg section.

Jim Dipiera said he heard a commotion outside his home on the 2200 block of Kennedy Saturday evening. He went outside and was shocked by what he saw.

"This kid comes running down the street, looked like he was 11-years-old, with an AR-15 and another kid had a 9 mm," said Dipiera.

Police tweeted out a photo of the arresting officer holding the high-powered weapon they say the boy who was actually 12-years-old, was carrying.

They arrested the kid along with 19-year-old Michael Mitchell, who they say was armed with a handgun.

Neighbors said it all started with a dispute between the two and some other young men on the block.

Dipiera actually went to get his own weapon, hoping he might get the AR-15 away from the boy.

"I figured I was going to try to get up behind him and disarm him," he said. "But I thought about it twice because I am disabled."

Neighbors told us the two arrested live at this address. A woman who answered the door told us police weren't telling us the true story.

Other neighbors, who didn't want to be identified, especially after seeing the image of the AR-15, said it's all enough to make them want to move.

"Guns were never an issue on this block," said one neighbor. "Fights, okay, maybe occasionally. But never weapons never, so this is scary."

Philadelphia police shared a photo on Monday of Officer Wrzesinski holding the weapons.

Carrying firearms on public streets or public property in Philadelphia.

No person shall carry a firearm, rifle or shotgun at any time upon the public streets or upon any public property in a city of the first class unless:
(1) such person is licensed to carry a firearm; or

(2) such person is exempt from licensing under section 6106(b) of this title (relating to firearms not to be carried without a license).

Police also sent out a message to parents: "Make sure your weapons are secured!"

This investigation is ongoing with Northeast Detective Division.