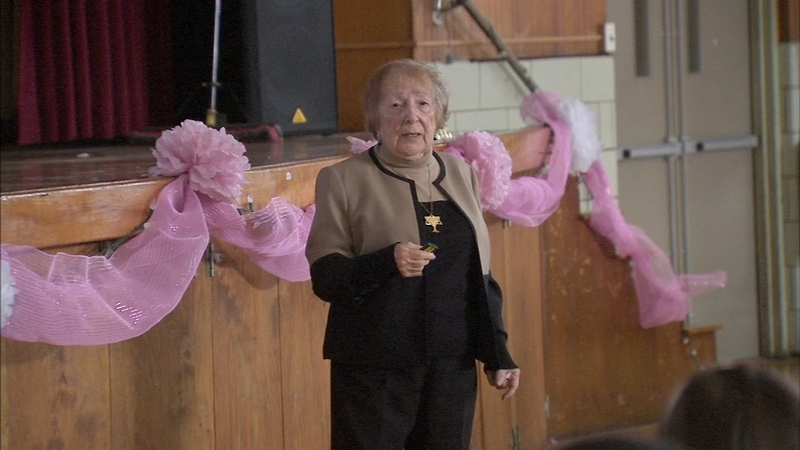 PHILADELPHIA (WPVI) -- The Holocaust Awareness Museum and Education Center of Philadelphia led a program at Our Lady of Port Richmond School on Monday to commemorate the 80th anniversary of the SS St. Louis. The St. Louis was a transatlantic liner that departed Hamburg, Germany, on May 13, 1939, for Havana, Cuba, but was denied entry.

There were 937 passengers on board. Ronnie Breslow was one of them. She was 8 years old when she traveled with her mother. They didn't know at the time the ship of Jewish refugees would never be allowed to dock in Havana, and she would end up at a detention camp back in Europe.

"When we arrived, we were almost 1,000 German Jews, the Cuban government would not allow us into this country," Breslow remembered.

The Holocaust Awareness Museum and Education Center of Philadelphia educates people around the area, and with the help of Skype--the country.

Eighth-grader Joshua Rivera explained, "You'd rather hear news from a person that was there rather than a person that heard it from a couple of different people."

"It's a once in a lifetime opportunity, and I think I will remember this for the rest of my life," said sixth grader, Rylee Sundermeyer.

Breslow was young but remembers when things started to change in the 1930s. With the passage of the Nuremberg Laws, her parents' business suffered, and she wasn't allowed to go to school with her non-Jewish friends.

"One day the teacher calls me to her desk and tells me you can't come back to school because you're a Jew," she recalls.

Ronnie's family knew they had to leave Germany. Her dad left first because, at the time, men were in greater danger. The plan was for Ronnie and her mother to follow on the St. Louis. After an uneventful voyage, the boat was refused permission to dock, even though passengers had legal landing certificates.

The German captain told the passengers he would not return to Germany, whatever the consequences. Ronnie says the captain traveled up to Florida, but the liner was met by the U.S. Coast Guard and told to leave US waters.

For weeks, they were at sea. The passengers finally were divided and dropped off in four different countries.

Ronnie and her mother were placed at a detention camp in Holland where children stayed in separate buildings from their parents.

"Mostly I remember the fact that there wasn't enough food. I was always hungry," Breslow recalled.

Ronnie and her mother eventually gained passage to the United States where her father was waiting. Others at that camp were later moved. Many did not survive.

Ronnie will keep sharing her story with younger generations.