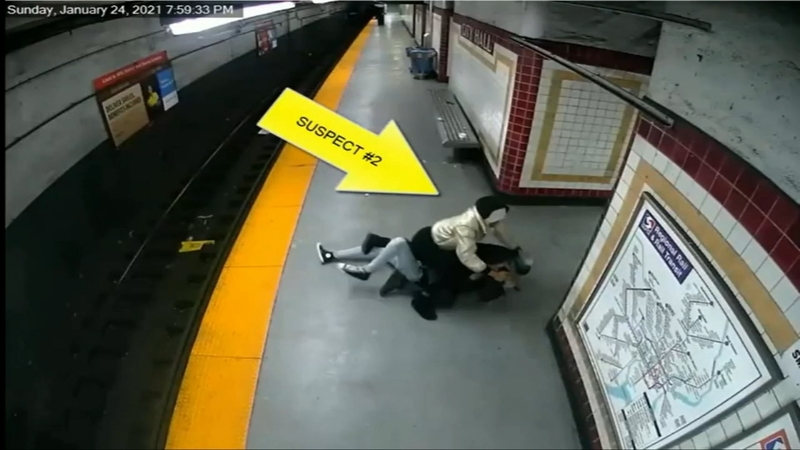 PHILADELPHIA (WPVI) -- Philadelphia police have released video of two suspects wanted in connection with a shooting on a SEPTA platform over the weekend in Center City.

It happened just before 8 p.m. Sunday while the 18-year-old male victim was sitting on the platform at the City Hall station.

Police say the teen was approached by an unknown armed suspect, described as a black male, and demanded his belongings.

Police say the victim refused and the suspect pistol-whipped him on the left side of his face.

"The victim then punched the suspect in the face and knocked him to the ground, at which time a struggle for the gun ensued," said police in a news release.

Video shows the victim scuffle with the suspect before another suspect, described as a black female, roughly 16 to 18 years old, gets involved.

The victim was shot twice in the lower body before the suspects fled the scene.

Police say the victim was able to gain possession of the suspect's handgun.

An 18-year-old was shot while on a SEPTA platform in Center City Philadelphia on January 24, 2021.

The 18-year-old was rushed to an area hospital and place in critical condition.