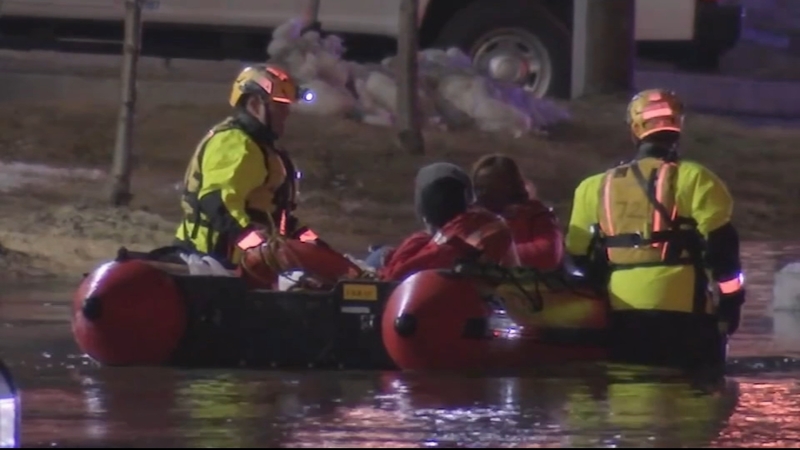 PHILADELPHIA (WPVI) -- A massive 48-inch water main that was installed in the late 1800s broke Tuesday night in North Philadelphia, leaving cars submerged and 10 people stranded at a storage facility.

It happened around 6 p.m. near 29th Street and Hunting Park Avenue.

"A customer was like, 'Look!' And by the time we turned around, we just seen the whole thing go boom," said Rebecca Besorcs.

Chopper 6 was over the scene as the floodwater consumed vehicles and trapped workers and customers in a nearby U-Haul storage facility.

Wanda Clay and her daughters were among those rescued in the raging floodwaters.

Chopper 6 was over a massive water main break that left workers and drivers stranded on Tuesday night in Philadelphia.

"We saw all the water, we couldn't get the gate up. One gate was stuck and the other gate you couldn't get it up," said Nicole Clay.

Officials said at least 11 people were rescued and no injuries were reported.

"We were able to rescue the woman from her vehicle that was trapped in the floodwater and there were 10 people inside U-Haul," said Philadelphia Fire Commissioner Adam Thiel.

Occupants inside submerged vehicles at 29th and Hunting Park have been rescued. Several employees and customers inside the U-haul facility have also been evacuated via boat @6abc https://t.co/NWxWeRXpu1 pic.twitter.com/LbmBV5Fga3

It's not clear what caused the pipe to rupture, but the rapid thaw from last week's freeze and aging infrastructure likely played a role.

The Clays are thankful for the quick actions of emergency crews.

"They're cool man. They came fast, which is great," said Wanda Clay.

A part of North Philadelphia has been flooded by a major water main break.

On Wednesday, Levin Stines returned to his parked car to find a water line about halfway up the body of the vehicle.

"The battery and everything is gone. The car is totaled," said Stines said.

As a delivery driver, Stines is not only out a mode of transportation but a means of income as well.

The Philadelphia Water Department worked to restore water to residents. PWD said customers who experienced reduced pressure should have seen normal flow return. If your pressure has not been fully restored, you are asked to call PWD at 215-685-6300.

The immediate roadway at the scene of the break is expected to be closed for at least a month.

A massive 48-inch water main break left cars submerged and some people stranded in a storage facility on Tuesday night in North Philadelphia.