Phillies Opening Day 2022: Here's everything you need to know

Gates officially open at 1:05 p.m. First pitch against the Oakland Athletics is set for 3:07 p.m.
WPVI
By Bryanna Gallagher 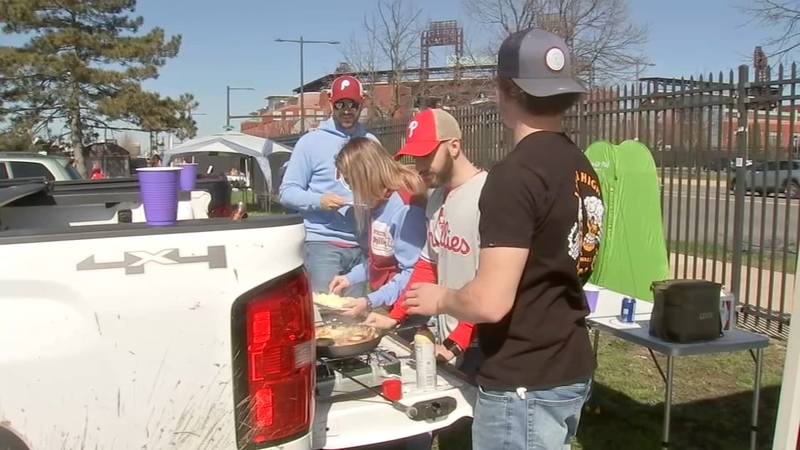 PHILADELPHIA (WPVI) -- Unlike Thursday's washout, it looks like Mother Nature is going to cooperate on Friday for the Phillies' home opener.

Phillies fans are hoping for a lot of home run hats this season.

Corey Davis got a chance to feel like he made the Phillies lineup and had a few laughs with the Phanatic on Opening Day 2022.

Longtime fans made their way to Citizens Bank Park on Thursday to pick up their tickets for the 2022 season.

Despite the recent soggy weather, the Phils are looking on the bright side: sunny skies for Opening Day.

A wet and empty Citizens Bank Park is going to look a lot different less than 24 hours from now!

Boekholder has been with the Phillies since 2003. Opening Day this year is even more special because he just announced his retirement.

"It's a little different thinking. This is probably the last time I'll be out on the field at a professional stadium doing what I've been doing since really I was a sophomore in college," said Boekholder.

Mike Boekholder is the head groundskeeper for the @Phillies, he’s been with them since 2003. Tomorrow’s #OpeningDay is bittersweet for him, as he just announced his retirement! Congrats Mike!

It will be his 30th opening day in professional baseball, and his 19th in Philadelphia pic.twitter.com/MueCEDEWP1

Despite the milestone, he says his crew has been preparing for over a month now. He's ready to get down to business and play ball.

"Spring doesn't really start for most baseball folks until you play your first home game of the year," Boekholder said.

Over at the team store, fans are embracing that baseball is back at the ballpark and making last-minute purchases for Opening Day.

"Kyle Schwarber and Nick Castellanos, everybody is looking for their t-shirts and jerseys, and as far as I know we're one of the only places in town that have them," said Kristin Zeller, the director of retail marketing.

Unlike Thursday's washout, it looks like Mother Nature is going to cooperate on Friday for the Phillies' home opener.

From Opening Day memorabilia to tons of fanatic gear, the ballpark is buzzing with staff who are excited and ready for Opening Day.

Fans are stocking up on gear for #OpeningDay with the @Phillies tomorrow! @6abc pic.twitter.com/nQjVaSYBNP

At first pitch of the Phillies home opener, temperatures will be in the low 60s with a shower around, especially towards the end of the game.

Meteorologist Karen Rogers says we still have residual flooding this morning after two days of heavy rain, even though the day itself is mostly bright and dry.

When does the ballpark open?
Gates officially open at 1:05 p.m. on Friday. First pitch against the Oakland Athletics is set for 3:07 p.m.

Who's on the Opening Day roster?

When does the New Era Phillies Team Store open Friday?
The team store opens at 10 a.m.

What time do the Opening Day ceremonies begin?
You should be in your seats by 2:20 p.m.

What are some of the new food and drink items at the ballpark?

When Phillies fans file into Citizens Bank Park this Friday for Opening Day, they will find all kinds of new food and shopping experiences -- including a Jersey Shore staple.

SEPTA is offering extra service to help Phillies fans get to the ballpark.

The transit agency says extra trains will be on deck to supplement regular service along the Broad Street Line to NRG Station just outside Citizens Bank Park.