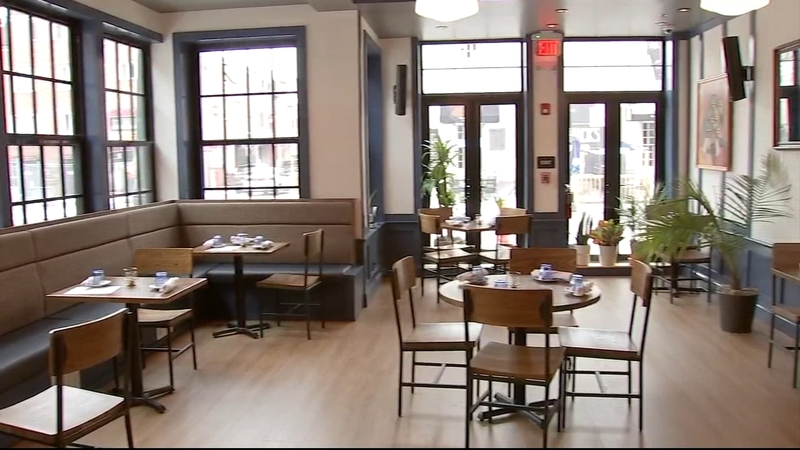 The city, however, has not approved any of these requests. As a result, the increased capacity may not happen for most city restaurants, at least for Friday night of Valentine's Day weekend.

James Garrow, a spokesperson for the Philadelphia Health Department, says their goal is to review the applications within 72 hours and the department hopes to approve some this weekend.

Following Tuesday's announcement by the city, restaurants could begin applying immediately. Of the restaurants that did submit the paperwork by Tuesday, Garrow says they did not complete the paperwork correctly. As a result, they are working with them to correct the submissions. The first successful application was received Wednesday.

Bridget Foy's local bar and kitchen, a longtime staple on South Street, reopened Friday following a devastating fire in 2017 that destroyed the restaurant.

The renovation involved three years of demolition and construction that included navigating delays caused by the pandemic.

"We're back at Second and South and it's been like, what a journey to get here," Foy said. "We're thrilled that, you know that even in these crazy times, we are, with a limited capacity, having guests back into the restaurant."

For now, Foy will operate at 25% capacity indoors and maintain outdoor dining.

According to business owners, the new ventilation standards as announced by the Philadelphia Department of Health for proper ventilation are confusing. The requirements could also mean costly upgrades that may go unused.

According to officials, if restaurants have an HVAC system or stand-alone ventilation unit in use, there are standards required to open to 50% capacity includes:

- At least 15 air exchanges per hour are measured indoors;

- Exhaust vent has a minimum six-foot clearance from tables, chairs, or other items.

"Everything inside is not only brand new but also meets all of the requirements," Foy said.

She also has filled out all of the lengthy paperwork. Still, she is not yet been approved to increase to 50% indoor dining capacity.

"Now we'll wait for the response from the Health Department," Foy said.

James Garrow, a spokesperson for the Philadelphia City Health Department, said all that needs to be approved is the paperwork and an inspector does not have to come in person to give a restaurant final approval to open.

However, inspectors will be making stops at restaurants like they have done during the pandemic to make sure they are compliant.

Avram Hornik operates eight restaurants with six currently open including Rosie's Taco Bar. He believes his ventilation system is actually better than what the city requires. However, like so many other frustrated owners, he has a barrage of questions as he navigates the confusing paperwork. Hornik has not been able to submit his paperwork yet.

"There's no instruction sheet for telling restaurants how to fill out the sheet. There's no place to ask questions and the forms themselves don't make any sense," said Hornik.