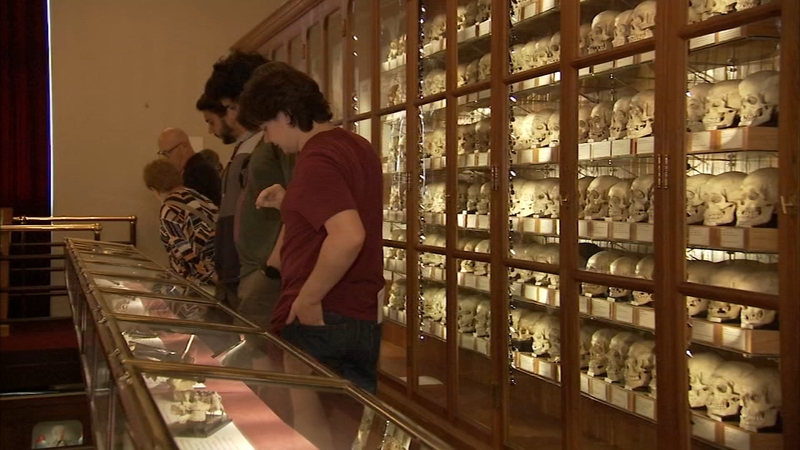 A 40-pound colon, a presidential tumor and a slice of Einstein's brain; those are just a few of the macabre medical curiosities you can see at Philadelphia's Mütter Museum.

The Mütter opened in 1858 to teach the public about medicine, and Educator Marcy Engleman says Einstein's brain is definitely one of the museum collection highlights.

"The average male brain weighs about 3 pounds; Einstein's only weighed 2.7," she notes.

There are 139 skulls on view, a gangrenous hand and a woman with a 10-inch horn growing out of her forehead.

"It's all made of skin," Engleman points out.

You can also see a tumor cut from the jaw of President Grover Cleveland, plaster casts of the original Siamese twins and a specimen known as "The Soap Lady."

"This woman was buried in a mass grave in Philadelphia," Engleman says. "They spread lye on the gravesite mostly to cut down on the smell from the decomposition but the lye seeped through the soil and interacted with this woman's body fat."

She is completely preserved in her own body fat.

Another Philadelphian, Harry Eastlack, suffered from a condition known as FOP where the muscles turn into bone, and Harry is about to get a friend.

"A woman recently passed away by the name of Carol," Engleman says, "She stipulated in her will that she wanted to be displayed at the Mütter Museum with Harry."

The Museum is run by the College of Physicians of Philadelphia and teaches the history of disease diagnosis and treatment.

"This giant colon was inside this man's body," Engleman says, pointing to a 40-pound megacolon. "The records say he was only going to the bathroom once a month."

The megacolon inflated to a weight of 40 pounds, giving the unfortunate fellow the nickname of "The Human Windbag."

But she says it's "The Wall of Wax Eyes" where visitors are most likely to pass out or make them "queasy or "uncomfortable."

The entire museum can challenge those with a weak stomach.

"It is true that people have been made uncomfortable from time to time," Engleman says. "They're learning things about what it means to be human."

Making for a museum visit that is disturbingly informative. If you visit when the weather is nice, you should also check out the healing botanical garden.