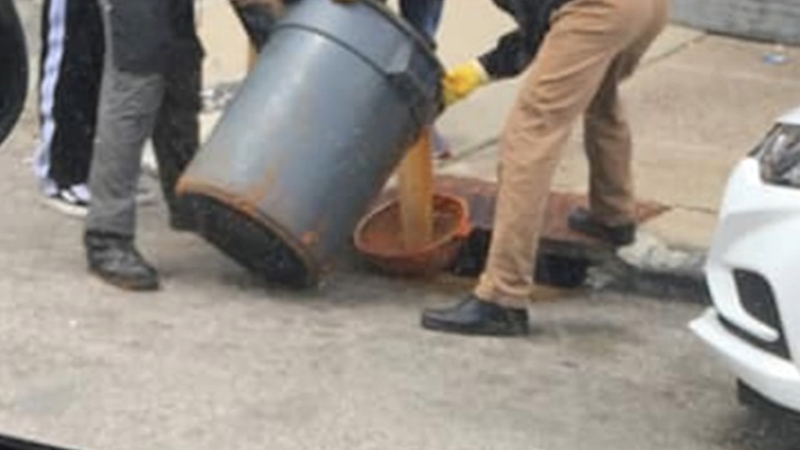 PHILADELPHIA (WPVI) -- A Manayunk restaurant is being accused of illegally dumping waste into the public sewage system.

The owner of Hot Pot tells Action News the pipes in the restaurant were clogged and that employees were dumping only mop and dishwater into the sewer, but one Manayunk resident isn't sold.

John Teague snapped photos and video of the employees dumping a substance down the sewer on a couple of occasions since the restaurant opened less than two weeks ago.

"It appears to me that they don't have any way to dispose of their garbage, so what they do is pile it here in this alley, wash it down here, and they're dumping garbage here in this sewer," he said. "Regardless of what it is, you're not allowed to take your garbage from the restaurant and bring it out to the public sidewalk and pour it out on the curb."

The City of Philadelphia said it is investigating.

The Water Department took samples from the sewer to see what exactly is being dumped.

"You should not be putting anything into the sewer other rainfall," said spokesperson John DiGiulio. "Anything else is considered illegal dumping."
Report a correction or typo
Related topics:
societyphiladelphia newshealthdumping
Copyright © 2022 WPVI-TV. All Rights Reserved.
TOP STORIES
AccuWeather Alert: Drenching Downpours Tonight
Officials ID 5 killed in Pottstown explosion; most were children
Official admits police made 'wrong decision' in TX shooting
Victim of elementary school attack says it could have been prevented
Police: Store owner robbed, assaulted with brick in North Philly
Dann Cuellar retires after 34 years at Action News
Another Trenton, NJ firehouse hit by gunfire
Show More
Rainy start to Memorial Day weekend at the Jersey Shore
Bank employees help kidnapped woman after she asks for loan
Massacre survivor says gunman told them: 'You're all gonna die'
4th grader 'did what she had to to survive' Uvalde shooting, aunt says
North Penn holds farewell parade for retiring superintendent
More TOP STORIES News