Opening Series sign of things to come for Phillies? 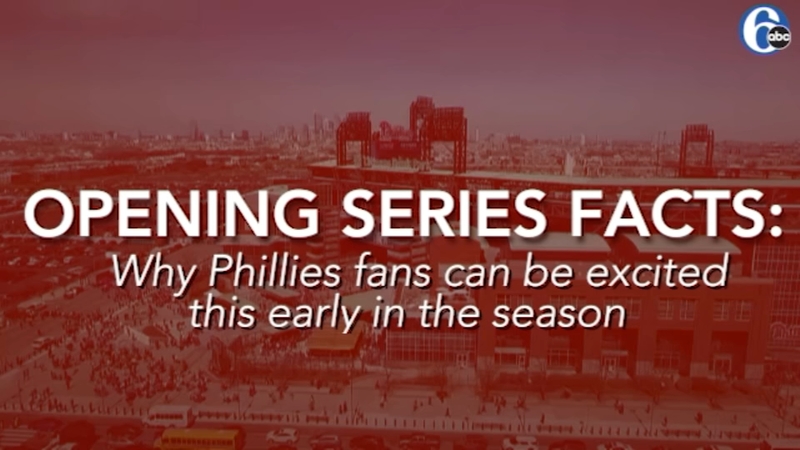 Opening Series sign of things to come for Phillies?

PHILADELPHIA (WPVI) -- If the first series of 2019 is any indication of how this season is going to play out, Phillies fans should be very happy.

The three games against the Atlanta Braves is chock full of fun stats. Get ready. There's a lot:

First baseman Rhys Hoskins hit his first grand slam in his 2019 debut - making him the 1st Phillie EVER to do so at home on Opening Day.

Rhys Hoskins says this lineup doesn’t give an opposing pitcher a chance to catch their breath #Phillies#OpeningDay pic.twitter.com/91QUL35vdQ

Fans at Citizens Bank Park did not see Harper get a hit on Opening Day. However, Phillies manager Gabe Kapler said Harper does not need to carry the team himself.

"Bryce doesn't have to come out and hit two home runs every night. He can hit right in the middle of the lineup, and he's gonna win a lot of games for us with home runs and doubles -- but he doesn't have to do it every night. Because one night it's gonna be Rhys and Maikel Franco and Andrew McCutchen, and the next it's gonna be Segura, Harper and Realmuto. And that speaks to the depth of our lineup," said Kapler.

Although Bryce Harper was hitless in his first game in a Phillies uniform, he hit a monster homer into the second deck in center field during Saturday's game.

Harper blasted the ball 465 feet, which is his second-longest homer since Statcast started tracking distances in 2015.

He said, "That's one of my favorite homers I've ever had, definitely."

Bryce Harper says he was so fired up after his HR in large part because he felt how "fired up" Phillies fans have been!!@6abc #bryceharper#RingTheBell pic.twitter.com/zKaWOZmbYh

But let's not forget left fielder Andrew McCutchen, the team's leadoff hitter who started Opening Day off with a homer of his own.

He's the first Phillie in 81 years to hit a leadoff home run in the first game of the season.

McCutchen has two hits with the Phillies. Both are homers.

Third baseman Maikel Franco hit a bomb of his own on Opening Day. He has three RBIs in each of the first two games of the season. He's only the second player in Phillies history to do so.

Philadelphia Phillies fans are excited for the team's debut. Check out the history of Opening Days and learn more about the projected starting lineup.

In total, the Phillies hit eight home runs in their first three games. This is the MOST in the 137 year history of Philadelphia baseball.

This is the first Opening Series sweep of a National League East rival in 18 years.

The Phillies remain the only unbeaten team in Major League Baseball.

I'm going to go out on a limb here -- it's going to be an AWESOME year. #Phillies

Pitcher Jake Arrieta said, "There are no weak spots in the lineup."

We tend to agree.