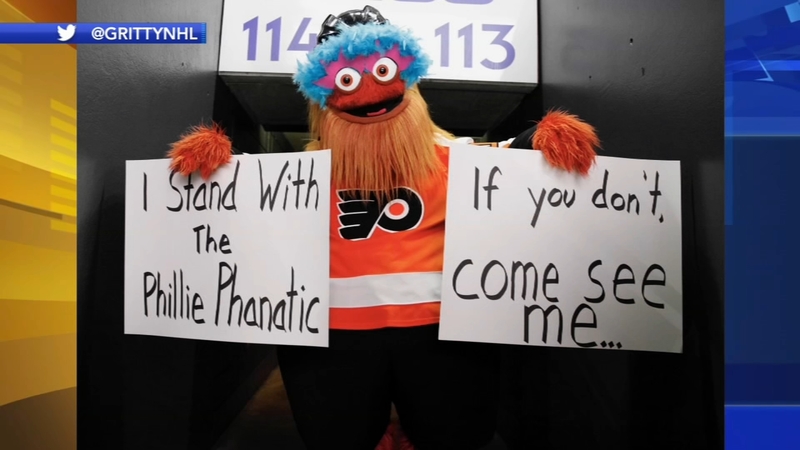 Gritty shows his support for Phanatic

PHILADELPHIA (WPVI) -- Gritty is defending his fellow mascot from fans who don't like the Phillie Phanatic's new look.

The Flyers mascot posted a photo on Twitter of him holding signs that read: "I stand with the Phillie Phantic. If you don't, come see me."

Nobody talks jazz on my friend. pic.twitter.com/AkdJsknAKT

The Phillies unveiled the redesign before Sunday's exhibition game in Florida.

The new look features flightless feathers rather than fur-colored arms, stars outlining the eyes, a larger posterior and a powder blue tail, blue socks with red shoes, plus a set of scales under the arms.

In his photo, Gritty is also wearing matching blue feathers and stars above his eyes.

GALLERY: Phanatic Through the Years


In a statement released Tuesday, the creators of the Phanatic called the redesign, "an affront to our intellectual property rights and to Phillies fans everywhere."

The lawsuit is currently in its discovery phase.

Here's the full statement from Bonnie Erickson and Wayde Harrison:

The creators of the original Phillie Phanatic, Bonnie Erickson and Wayde Harrison (who are represented by law firm Mitchell Silberberg & Knupp LLP), expressed their dismay at the appearance Sunday of the so-called "new" Phillie Phanatic at the Phillies spring training game:

"The Phillies lack of good faith in negotiating for an extension of the copyright assignment for the Phillie Phanatic is disappointing," said Wayde Harrison. "But the unveiling of the so-called 'new' Phanatic on Sunday is an affront to our intellectual property rights and to Phillies fans everywhere."

"For more than 40 years, we have worked closely with the Phillies, making all the Phanatic costumes, providing artwork and ideas until June of 2018," added Bonnie Erickson. "The Phanatic has performed successfully for the Phillies and the city of Philadelphia for decades. The 'business decision' by the Phillies to roll out this 'new' Phanatic is a transparent attempt to deny us our rights under of the Copyright Act. We would love to have the real Phanatic continue with the Phillies."