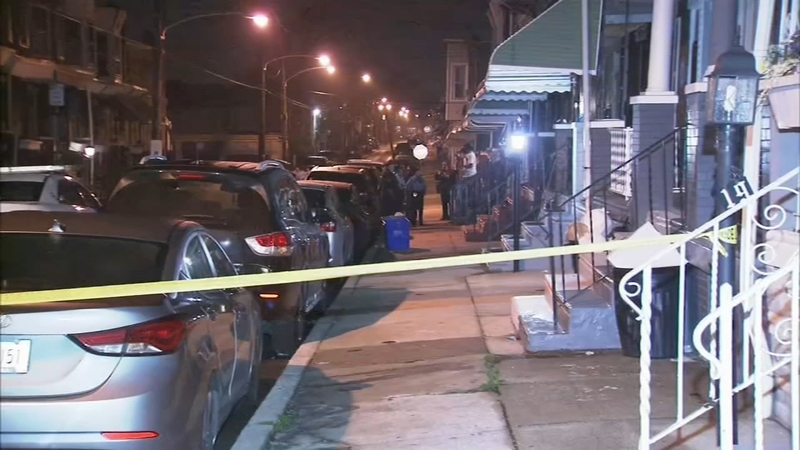 PHILADELPHIA (WPVI) -- Philadelphia police are investigating a shooting that injured five people, including a toddler and his young mother Monday night.

The gunman opened fire into a crowd around 10 p.m. along the 2300 block of West Harold Street, according to investigators.

Police said a two-year-old boy was taken to the hospital in critical condition after being shot in the back.

Philadelphia police are investigating a shooting that left at least four adults and a young child injured on Monday night.

The boy's 18-year-old mother was hit multiple times and is also in critical condition, according to police.

Investigators said a 14-year-old girl was also in critical condition after being shot.

A 25-year-old woman is among the injured. She was shot twice in the leg, along with a 42-year-old woman who was taken to the hospital with a graze wound to the arm, according to investigators.

Police believe a man in all dark clothing stood about a half-block away and fired into the crowd. The group was having a birthday party for a man who died just a few days ago, said police.
Investigators said the group should not have been gathering due to the stay-at-home order that's in place during the COVID-19 pandemic.

"They should not have been gathering, although, that is not the issue here. The issue is we have a young child shot. That is serious. The mother very young, also shot, and three other females shot and that is the issue here and we need to locate any persons who did this and make sure we get any information that we can out of this situation," said Philadelphia Police Deputy Commissioner Mel Singleton.

On Tuesday, Mayor Jim Kenney called the shooting "horrible by itself" but "gut-wrenching" amid the coronavirus outbreak.

He said anyone committing gun crimes would be arrested, called on gun owners to secure their weapons and called on prosecutors to enforce consequences for anyone carrying weapons illegally.

In addition, the mayor said officers would be enforcing the city's order to stay home and could issue citations to violators.