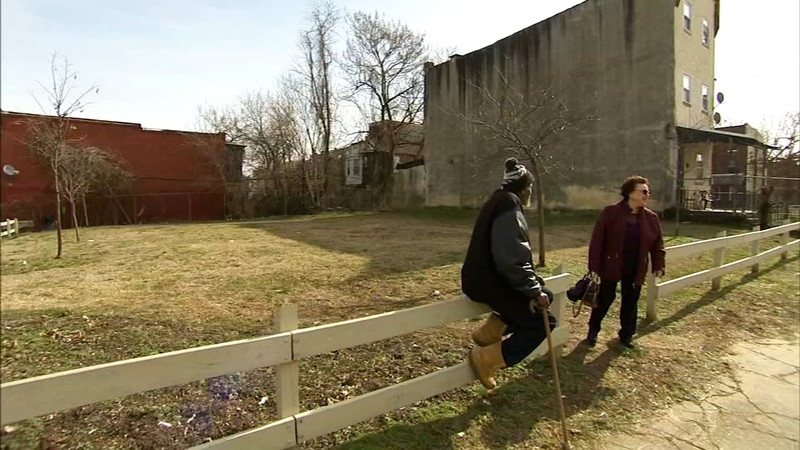 MANTUA (WPVI) -- The Philadelphia Flower Show is approaching its final weekend. The theme, Riviera Holiday offers a virtual vacation and perhaps some inspiration for your own backyard garden.

But the show is also the biggest fundraiser of the year for the Pennsylvania Horticultural Society.

Sheila Parker has spent most of her life in the city's Mantua section.

"So did my grandparents, who purchased their home Back in 1935," she said.

As the years went by and older residents passed, Parker says vacant lots that had once been garden-filled points of pride became overgrown eyesores.

"People were coming by leaving trash, even down to mattresses and even a sink," she said.

Parker decided to do something about it. She reached out to the city for help and was connected with PHS and a program called LandCare.

"We partner with the City of Philadelphia to clean and green vacant lots throughout the city," said Keith Green from Philadelphia LandCare.

"Before the program, this was a jungle and they came and they cleaned it and the grass has been cut," said Parker.

Through the LandCare program, PHS maintains 12,000 vacant lots around the city.

"We get it to where it's stabilized, to where it's inviting to the community," said Green. "We remove debris, add soil, add grass seed, plant trees on the site."

Now Parker says the lot is again a source of pride for the neighborhood, where kids can play and people can gather.

"The young people really start to appreciate it. I used to hear somebody say don't throw that in there. Miss Sheila's not gonna like that. And even some of the young people would say to me, Miss Sheila the grass is getting very high," she said.

PHS hires local minority-owned contractors to do the work and trains inmates at the Philadelphia Correctional Center for jobs upon release.

"And it helps deter crime. There's some studies that have been done that have shown close to a 30% decrease in gun violence in neighborhoods in which our lots are cleaned and greened," said Samir Dalal, Philadelphia Land Care Planting Manager.

And PHS says it's often older residents, like Sheila Parker, who lead the fight to keep their neighborhood clean and green.

"It's that motivation that we love," said Green.