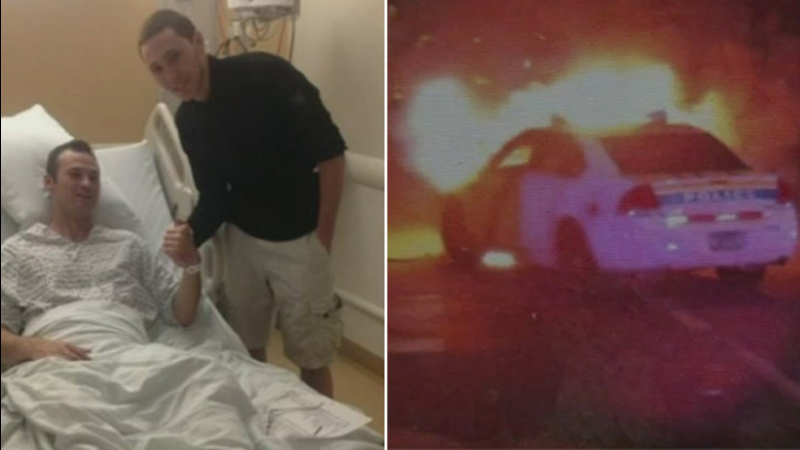 GRAYS FERRY (WPVI) -- A young man and a teenager are being hailed as heroes after they rescued a police officer and a pickup truck driver from a fiery crash in South Philadelphia.

The crash happened on Saturday evening at 28th and Tasker. Police say the officer was on his way to an emergency - with the cruiser's lights and sirens active.

Police say the officer approached the intersection "with caution" but was hit by the Toyota Tacoma pickup as it made a left turn.

17-year-old Joseph Chambers, who is a volunteer firefighter in Ridley Park, Delaware County, was visiting his sister near the scene of the crash when they heard a loud bang.

Chambers ran outside and saw that a patrol car and pickup had collided and the patrol car was on fire.

He ran up to Officer Mark Kimsey, 30, who was trapped in the car.

That's when 24-year-old Dante Johnson arrived to help Chambers pulled the officer out of the burning police car.

"If we hadn't gotten him out in time - he would have been hurt bad," Johnson said.

"He was in a tremendous amount of shock," Chambers recalled. "He was in and out of consciousness."

"As I'm recording the cop car, a flame comes out of the hood of the car. A couple seconds later, the car literally burst into flames," Lemon said.

The rescuers also pulled the unconscious 52-year-old pickup truck driver out of his vehicle.

"I kept his neck stable while me and two other guys pulled him out and laid him down. I checked his pulse. He was breathing. He was out of it, but he was alive," Chambers said.

"He was there with his buddies and they all said 'thank you,'" Chamber said. "I went in and talked to him for a little bit. He was glad I was there to help him out and I'm glad I was there," Chambers said.

Both drivers are expected to be okay.

Chambers and Johnson said while some may call them heroes, they said they were only doing what anyone else would do.

(UPDATE: Police earlier believed the driver had fled and a passenger of the truck was in the hospital. Investigators now say it was the driver who was taken to the hospital and there was no passenger.)